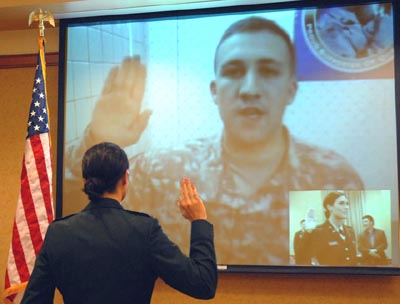 Video conferencing allows people at two or more locations to see and hear each other at the same time, using computer and communications technology. They exchange visual information with Webcams (digital video cameras) and streaming video. Audio content may be distributed via computer or the telephone system.

The chief advantage of video conferencing is that audiences tend to absorb information better if they are both seeing and hearing it. To accomplish that, video conferencing programs combine Web page tools and Internet communication into one interface to create an interactive meeting environment. These tools include:

The simplest video conference requires two people, each with:

Video input from the camera and audio input from the microphone are converted to digital data. Software is used to compress the data so that it can travel more quickly via ISDN lines, broadband Internet or WiFi. When the data reaches its destination, it's decompressed to be viewed on a computer monitor or television screen and heard through speakers. Acoustic echo cancellation software is used to remove sound interference and eliminate delays so that sound and visuals are in synch [source: The Tech-FAQ].

Video conferencing software can be purchased by itself, or the software and server space can be provided by a hosting service.

Every year, for example, 35,000 hours of training is broadcast to 1,200 U.S. military sites around the world. Video conferencing speeds up the work of the military justice system by connecting experts in one location with military tribunals or medical review boards in another. And, the Army's combat planning in Iraq includes daily video conferences to outline daily missions and review strategy with field commanders, plus additional conferences with troops.

These meetings are transmitted using the Aethra SuperNova video teleconference system. Because the details are top secret, these video conferences require secure transmissions. Video and audio signals are sent across hard-wired, fiber-optic connections to and from each conference site, over encoded military satellite systems, or a combination of both. Troops connect to the system from headquarters, the battlefield or nearby military bases [source: Special Operations Technology]. Over time, commanders recognized the need to let soldiers use that technology to connect with their families at home.

Next, we'll see how military video conferencing works for military personnel and their families.