The Dark Side of Science: Unit 731 and Nazi Germany 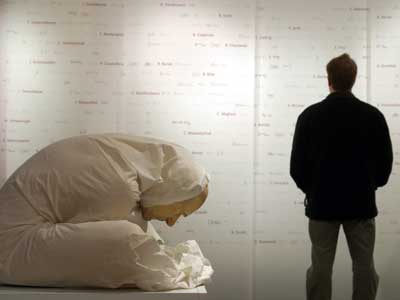 A man views a wall listing the names of 800 out of an estimated 10,000 victims of Nazi experiments as a memorial titled 'Man with Sheet' created by Australian artist Ron Mueck crouches silently at the Medical History Museum in Berlin.
Kurt Vinion/Getty Images News/­Getty Images

­Human experimentation doesn't have to be an exercise in cruelty, yet we're not even a century removed from some of the more deplorable acts -- cases that could easily rival and even surpass the alleged crimes of Herophilus and his colleagues.

As in ancient Alexandria, scientists and doctors have often turned to the disenfranchised when the need for test subjects arises. After all, we experiment on animals by telling ourselves that the greater good outweighs the desires of a few lesser creatures. History has shown us where this line of thinking can lead when we see other humans as the lesser creatures in question.

J. Marion Sims is widely considered the father of gynecology and even became the president of the American Medical Association in 1876. Yet Sims developed his experimental surgeries by testing them on African slaves, often without anesthesia.

The United States often turned to prisoners for medical tests, such as the 1906 cholera experiments in the Philippines and the 1915 pellagra experiments in Mississippi. Poor and orphaned children suffered similar fates. In 1908, three Philadelphia physicians infected several orphans with tuberculosis, permanently blinding several. Between 1919 and 1922, Dr. Leo Stanley injected 656 prisoners at San Quentin Prison with animal testis trying to slow or reverse ageing [source: Lunenfeld]. Before the 1970s, roughly 90 percent of all pharmaceutical products were tested on prisoners [source: Proquest].

Yet when it comes to experiments on captives and prisoners, few examples resonate as strongly as the experiments conducted by the Nazis during World War II on Jews, gypsies and other targeted individuals. The doctors conducted cruel and often lethal experiments into wartime injury treatment generally by inflicting said injury on a captive patient. They froze victims to research hypothermia, placed them in compression chambers to test the effects of high-altitude flight. They also conducted brutal sterilization experiments in the name of racial superiority.

Similarly, Japan's infamous Unit 731 reportedly killed more than 10,000 Chinese, Korean and Russian prisoners of war to research and develop biological weapons. They infected inmates and performed vivisections on them, all in an attempt to craft even deadlier weapons out of disease.

­How are we suppose­d to process such atrocities? And what do we do with the data gleaned from degradation and torture?