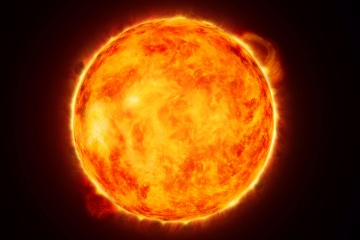 Could we one day capture the sun’s energy in massive quantities to power everything on Earth?
© hadzi3/iStockphoto

The next time you're filling up your car's gas tank, take a moment to remember that fossil fuels are a finite resource. Eventually, humanity will need to satiate its hunger for energy from other sources.

The solution, perhaps, is in the stars. Or more accurately, our sun. Imagine filling your vehicle's tank not with gasoline, but with pure sunshine. In some distant future, this could happen thanks to the concept of a Dyson sphere.

Think of a Dyson sphere as a huge, energy-catching ball built around a star. It seizes solar energy and converts it into the kinds of energy that we can use to power vehicles, computers or whatever other advanced, power-sucking technologies we manage to develop in the next couple of million years. That is, of course, if we manage to survive that long without blowing everything up.

Dyson spheres are still very much in the imaginary stage of development. But it's not hard to see why we'd someday need greater, more powerful energy sources. We're burning fossil fuels at ever-increasing rates in order to operate all manner of gadgets and goods. Sustainable energy sources, such as solar and wind power, are good for supplementing coal and petroleum, but right now they can't power all of our cars and smartphones.

Fantastical Dyson spheres have become a staple of science fiction books and TV shows and Internet forums. "Star Trek" junkies debate the relative possibilities (or ridiculousness) of trying to encapsulate an entire star with a manmade machine. Blog-loving scientists lay bare ideas for making real these gigantic spheres; others pick apart their aspirations with stinging comments.

No matter what you think of the idea, one thing is for sure: When the taps finally run dry on oil, and eventually they will, humankind will either need to scale back on its energy usage or find new power sources. Maybe a Dyson sphere is the way. 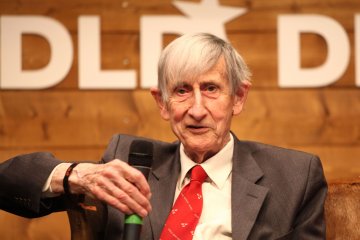 Not all civilizations are the same, at least according to some theories. In the early 1960s, an astrophysicist named Nikolai Kardashev proposed the idea that there may be three classifications of civilization in the universe.

Type I civilizations have learned how to harness all of the energy sources on their home planet. That'd be us. Or at least, someday it might be us. According to theoretical physicist Michio Kaku, we might get to that level in the next century or two.

We humans are clearly not Type III material just yet. First, we must start with baby steps — by finishing the pillaging of our planet to tap its remaining resources. And then, we'll attempt to shove our way into the more upscale Type II neighborhood by capturing and channeling the immense energy of our sun. This might be doable in the next few thousand years, if we stay alive that long.

In his 1937 book, "Star Makers," author Olaf Stapledon was perhaps the first person to conceive of a so-called "light trap" used to mine the sun's energy. He wrote of energy capture systems so enormous that they actually dimmed the light of the galaxies.

This story is what sparked the mind of Freeman Dyson, a mathematician and theoretical physicist. He began pondering just how possible or impossible it might be to capture all of a star's energy for human use.

The sun produces an unimaginable amount of energy. To put it one way, it generates about 5 x 1023 horsepower. According to NASA, that's enough energy to melt an ice bridge (two miles wide and one mile thick) spanning from Earth to the sun ... in a single second [source: NASA]. That's the rough equivalent of one trillion 1 megaton bombs going off each second. To put it a less scary way, a single second of sun action is enough to power our world for half a million years [source: Boston.com].

That's a serious amount of power. Every second, the Earth receives about 400 trillion trillion (nope, that's not a typo) watts worth of the sun's power. Yet because of its distance and direction, most of it doesn't reach our planet. Surrounding the sun with an energy-capturing megastructure like a sphere would be a far more efficient way to snag the sun's crazy juice.

You could build a solid sphere around the sun to catch every last ray. In doing so, you'd have 550 million times more surface area than our whole planet, all catching rays to send back to Mother Earth in the form of raw power.

Of course, in addition to plummeting millions of people on Earth into permanent seasonal-affective disorder, you'd be facing very real gravitational challenges. In short, it would be really difficult to keep the sun centered within the sphere, meaning that it might collide with an edge of a sphere, causing a catastrophe so amazing that it would likely garner the most YouTube views ever ... if anyone survived to upload it.

There's also the extreme difficulty of finding enough raw materials to build a solid shell. Such a feat would probably require more material than we could find in our entire solar system.

Even if we could find enough solid material to build a solid sphere to envelop the entire sun, the strength of this gigantic sun ball would have to be Herculean. Otherwise the sphere would just break into an untold number of pieces. In other words, it would be another spectacular failure.

So, let's skip the unfeasible solid sphere altogether. On the next page you'll read about ideas that might be more within the realm of reality. 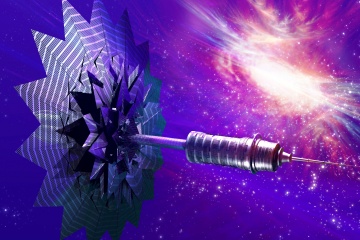 Solar sails similar to the one in this concept art could be the key to harnessing the sun’s power.
© Victor Habbick Visions/Science Photo Library/Corbis

It would be impossible for us to build a solid sphere around a star. Freeman Dyson admitted as much. He proposed instead a concept in which we released many independent machines to circle the sun, collecting energy and beaming it to Earth.

The satellites might be arranged in neat rings. Or they may zoom at different orbits around like a swarm of bees gathering the pollen of power. Some might be habitable, or they might be used solely for energy gathering.

Instead of a solid sphere or ring of satellites, there's a third configuration that might make up a Dyson sphere. In this instance, a number of solar sails would orbit the sun. These sails would create a loose bubble around the sun, held in place thanks to a balance of gravity and radiation pressure from the star within.

These satellites would actually be called statites (derived from the words satellite and static) because they'd hover in one place instead of moving in orbit. As with the ring or swarm concept, statites would absorb outgoing solar power and then redirect it to Earth for our use.

Regardless of the final blueprint, a Dyson ring, sphere, bubble or swarm is going to require material resources and energy on an unprecedented scale. We won't find enough raw materials for this project on Earth. So some speculative types have proposed an alternative — harvest the materials from other planets, such as Mercury.

Like an inconvenient wetland bogging down a tract of land zoned for commercial use, we could simply disassemble Mercury and put its sun-scorched surface towards a better purpose. That's an idea proposed by Oxford University physicist Stuart Armstrong.

Mercury is loaded with useful materials (such as iron) and it's the closest planet to the sun, so it makes sense to start there. Once Mercury is dismantled and the first Dyson rings are installed, the project would gather momentum and speed, collecting more and more energy, fueling the production of larger and better solar collectors. And of course, all of that energy would be put to use for other purposes, such as supercomputing (on a never-before seen scale), faster space travel technologies and innumerable other ideas we haven't even conceived.

We wouldn't need to do all of this with painstaking labor. Robots would perform the work of mining and assembling new solar arrays. And the number of robots would continually increase (thanks to self-replicating capabilities) as the scale of the project grew, until they became an army of automatons crushing planets and asteroids to manufacture evermore energy collectors.

The Dilemma of a Dyson

The universe is a cold, heartless place. Once we've consumed all of our Earth-based energy resources, we'll be in dire need of a way to power our furnaces and refrigerators. Our sun is a like a humongous power plant, warm and life giving. It's our best shot at perpetuating our species and evolving into more capable creatures.

At present, though, a Dyson sphere of any kind is simply beyond our means. If we chose to mine Mercury, for example, we'd need robot technology that just doesn't exist at present. Those robots would need to operate flawlessly far from their human commanders, working for decades to fashion raw materials into energy collector technology. That means extracting the valuable metals from rock and then somehow building sophisticated electronics, all without on-site human help.

There's also the challenge of getting collected power back to Earth so that it can power your television. A really long extension cord probably won't cut it. People have instead suggested using laser beams or microwaves for this purpose. But lasers lose their efficiency after traveling less than a mile. Microwaves work at much longer distances (nearly 100 miles, or 161 kilometers), but nowhere near far enough for the purposes of a Dyson sphere.

Although powering our planet this way isn't a possibility at present, the concept of Dyson spheres may very well help us find extraterrestrials that have moved past the Type I stage. In 1960, Dyson figured that if a civilization did indeed manage to channel a star's electromagnetic energy, there would be a lot of leftover heat pushed outwards as a byproduct.

Detecting that outgoing infrared radiation may be the key to detecting other intelligent life forms on the other side of the universe, which researchers are currently investigating. They've already found areas with a lot of the heat of a star but without the light, leading some to think that aliens may be trapping much of the energy.

What all of this means is that we're simply stuck in the Type I civilization category for the moment. As the centuries pass, though, our technologies may advance exponentially. And if they do, we may find that we're able to turn our sun into a power source that may transform our entire race, making us more technologically proficient and space-worthy than we could've ever dreamed.

It's impossible to know what's in store for the future of humanity. Already in our history, great civilizations have risen and collapsed. Will our current incarnation find its way forward without self-destructing? Will we bomb ourselves back into the Dark Ages? Or will a shift in climate or an indomitable virus end life as we know it? If by some chance we do emerge from our current form into a higher state of being, we'll surely need more energy. And without some unforeseen physics breakthrough, the sun is the only way we'll manage to fuel our development for thousands or millions of years to come.