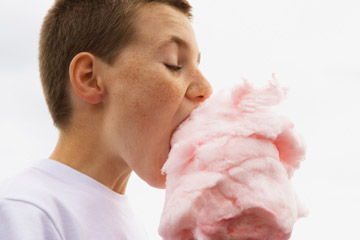 If you want to feel like a kid again, go to a carnival. You can ride the Ferris wheel, gape wide-eyed at the sword swallowers and gasp with amazement as the magician correctly discerns the card in your pocket. You can even watch spellbound as the cotton candy maker spins a confection that looks like pillows of wool but melts in your mouth like a snowflake.

OK, cotton candy may lack the "wow" factor of many other carnival sights, but it does have its own kind of magic: the magic of food science. Cotton candy wasn't always kids' stuff. In fact, its roots go back to the banquet tables of the European aristocracy and a time when sugar was so rare that it was kept under lock and key.

Since then, cotton candy has traveled the world under a variety of aliases. It's candy floss in Great Britain, fairy floss to the mates in Australia, la barbe à papa, or Papa's beard, to the French, and zucchero filato, or sugar thread, in Italy.

This article will take you on that journey through time and space, following cotton candy from its origins as common table sugar to a fluffy mass of sheer sugary delight. And it all boils down, literally, to a trick called caramelization. Read on to learn more.

Before cotton candy existed, there was spun sugar, but before people could "spin" sugar, they had to caramelize it.

Caramelization is what happens when sugar melts. A crystal of granulated sugar, scientifically called sucrose, is held together by chemical bonds, but energy from heat can break these bonds, splitting the crystal into its two component sugars, glucose and fructose. These sugars break down further, freeing their atomic building blocks: carbon, hydrogen and oxygen. Hydrogen and oxygen atoms reunite to form water, and the carbon clusters in increasingly larger clumps. Eventually the water evaporates and the carbon starts to burn.

However, if you stop this process while the sugar is still a liquid, you can make spun sugar. Pastry chefs in 15th-century Venice created masterpieces with spun sugar. Using forks, they drizzled the golden syrup onto a broom handle, and then worked the warm, pliable threads into different shapes and even entire scenes. Their artistry decorated plates of preserved fruits and other desserts. Spun sugar was a treat for the wealthy -- the two essential ingredients, sugar and time, were luxuries for most people. Spun sugar is still made today, but modern recipes include cream of tartar and corn syrup, ingredients that help prevent recrystallization.

Spun sugar was a precursor to cotton candy -- modern cotton candy would have to wait for the technological advances of the Industrial Revolution and the teaming of two unlikely business associates. 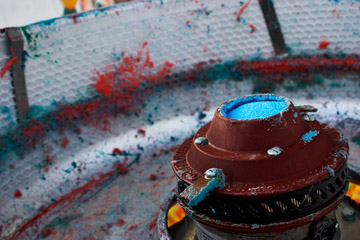 In 1899, John C. Wharton, a candy maker, and William J. Morrison, a dentist, received a patent for "certain new and useful improvements in candy machines." Wharton and Morrison worked together in Nashville, Tenn., to design a machine that made spun sugar, a process normally done by hand.

Instead of melting sugar in a pan over an open fire, it was melted by an electric heating element at the base of a funnel-shaped dish. Instead of flinging the substance with a fork, the machine rotated rapidly, flinging the syrup through tiny holes in the funnel using centrifugal force. An outer bowl caught the threads as they cooled. The finished product was fine and fluffy, almost ethereal. Thus, the inventors dubbed it "fairy floss." The name "cotton candy" didn't become popular until the 1920s.

Here again, sugar's chemical construction was instrumental to the outcome. The molten sugar was flung so forcefully and cooled so rapidly that the molecules didn't have time to reorganize as crystals. Cotton candy, like caramel and toffee, is thus called a noncrystalline candy.

Fairy floss was a huge success at the St. Louis World's Fair in 1904. It was scooped out and served in a wooden box for 25 cents -- half the admission price to the fair itself -- and the entrepreneurs earned more than $17,000 over the exposition's six-month run.

But like many prototypes, the cotton candy machine had room for improvement. It was noisy, shook terribly and often broke down. A spring base, added in1949, increased its efficiency and durability [source: Feiler].

Although little has changed in the cotton candy machine's basic design, today's machines continue to evolve with technology. Larger models can hold 3 pounds (1.36 kilograms) of sugar in the cylindrical head. Some heads are compartmentalized, allowing the operator to load up to three different colors and flavors of sugar and switch between them during one run. The head descends into one or more coiled heating elements that reach a temperature of about 300 degrees Fahrenheit (150 degrees Celsius). Temperature and voltage can be set and monitored digitally. The rotating bowl may span almost 30 inches (75 cm) and spin at 3,450 revolutions per minute, spewing filaments of molten sugar that measure just 50 microns in diameter [source: Science World].

Colors and flavors have come a long way, too. Pink, vanilla-flavored cotton candy is traditional and still the best-seller, but you can find a rainbow of colors and flavors, including bubble gum, mint and piña colada. Simpler innovations include a stabilizer, a sturdy mesh attached to the inner wall of the bowl that makes the candy easier to collect, and a plastic dome called a bubble, which shields half the bowl to help protect the cotton candy from dirt and insects.

In 1972, this carnival food met mass production when a fully automated machine was unveiled. Cotton candy could now be found at grocery stores and other outlets long after the carnival left town. A continuous roll of cotton candy is gathered onto a conveyor belt, where it's shaped and lopped into uniform bundles. It's then packaged in bags or tubs made of plastics that prevent the passage of water in and out of the container. Sugar is hygroscopic and attracts moisture, but water can make cotton candy dense and gooey.

The latest innovation, which could be coming to a shopping mall or bowling alley near you, is a cotton candy vending machine. Built by an Irish manufacturer and introduced to the United States in 2009, this machine comes a little closer to the carnival experience, playing music as it spins and dispenses the candy.

Nutritionally speaking, the sugars in cotton candy are simple carbohydrates, so they supply your body nothing but calories -- just pure energy. Like all calories, they can contribute to weight gain, but on the other hand, a standard serving of cotton candy contains far less sugar than one can of a regular soft drink: one teaspoon of sugar versus 12.

Check out the table below to get an idea of how cotton candy stacks up to other carnival treats. Recipes and foods vary among vendors and events, but you can see that cotton candy lacks the excesses of other typical fair fare.