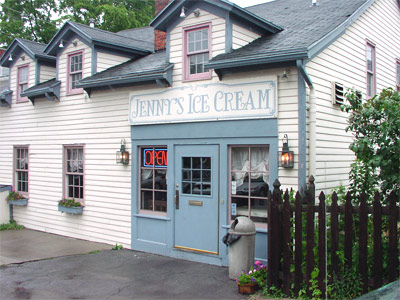 In 1999, retail sales of ice cream in the U.S., the worldwide leader in ice cream production, topped $4 billion. In 2002, more than $20 billion was spent on frozen desserts. The leading states in ice cream consumption are California, Indiana, Pennsylvania, Texas and New York. Americans ate an average of 21.5 quarts of ice cream per person in 2004 [ref].

With that much money to be made, the ice cream industry can be secretive and underhanded. Deborah Hanny, owner of Sweet Jenny's Ice Cream in Williamsville, NY, protects her recipes carefully. Her shop has been photographed by men in suits and she once caught someone in her upstairs office hurriedly trying to copy down her recipes.

Ice cream making secrets are seldom passed down from generation to generation these days. So where do people in the ice cream industry learn their craft? At ice cream school. Pennsylvania State University offers a week-long "Ice Cream Short Course" intended for industry professionals. The course teaches the science and technology used to make ice cream. They also offer Ice Cream 101 for ice cream hobbyists who just want to learn more about their favorite frozen treat. The University of Guelph, Ontario's Dairy Science and Technology school, also has a long history of teaching ice cream science.

The earliest reports of people enjoying flavored ice desserts come from the Romans and the Chinese. Marco Polo returned from his famous expedition with fruit-flavored ices, reporting that Asians had been making them for thousands of years. These delicacies became popular in France in the 1500s, but only among royalty. Over the next few centuries, the process of making them evolved from hauling mountain ice to salt/ice freezing methods. Cream was introduced as an ingredient, and by the 1700s, people were enjoying a dessert that was very similar to today's ice cream.

The hand-cranked ice cream freezer was first developed by Nancy Johnson in 1846. Ice was readily available from large warehouses in that era, so ice cream became a treat that could be enjoyed by almost anyone, not just the rich. Ice cream making was revolutionized again in 1851, when Jacob Fussel started the first wholesale ice cream manufacturing operation in Baltimore, Maryland. Fussel's dairy business had excess cream and he couldn't figure out what to do with it. He tried using it to make ice cream, and before long his ice cream business outsold the rest of the dairy.

The business slowly evolved for the next few decades. Manufacturing methods and ingredients improved, while refrigeration technology became cheaper and more efficient. By the 1920s, home refrigerators and freezers became more common, which gave the ice cream industry another boost. Sugar was rationed in the U.S. during World War I, but the ice cream industry convinced the government that ice cream was an "essential food." Ice cream factories were allotted sugar rations and production continued.

Ice cream increased in popularity until the Depression years caused a drop in sales for virtually all non-essential goods. Sales increased in the years leading up to World War II before leveling off in the post-war years. The rise of the giant supermarket created demand for cheaper, mass-produced ice cream, but quality suffered. The 1960s saw a resurgence in "premium" ice cream, while the following decades saw the market fragment into low-fat varieties for the health-conscious, including frozen yogurt, fruit bars, ice milk, fat-free ice cream, and dozens of other varieties. However, ice cream still makes up about 60 percent of the market share among frozen desserts [ref]. While ice cream is enjoyed worldwide, it has become an American tradition.

In the next section, we'll learn how to make ice cream in five minutes -- without using an ice cream freezer!

Overrun and Who invented the Ice Cream Cone?

Overrun is the increase in volume from the initial mixture to the final product, which is caused by the introduction of air bubbles by the dasher. It is indicated as percentage -- a gallon of mixture that turns into 1.5 gallons of ice cream has a 50 percent overrun. A lot of commercial ice cream uses a 100 percent overrun. That is, it's half air. Premium ice creams use a smaller overrun.

As a rule of thumb, you can judge the quality of an ice cream by weighing it. Heavier ice creams are generally higher quality. However, you have to compare like volumes and flavors, since some flavors are heavier, and solids mixed into the ice cream can affect the weight as well.

The invention of the ice cream cone is controversial. An Italian immigrant named Italo Marchiony has a strong claim because he filed a patent for a cone making machine before anyone else had the idea. However, there are reports that the French were eating ice cream from pastry cups or cones long before the American ice cream cone was developed.

Regardless of who first created it, the ice cream cone made its mark at the 1904 Louisiana Purchase Exposition in St. Louis, Missouri (often referred to as the 1904 St. Louis Fair). There are conflicting legends about various waffle makers who started selling waffles folded into cones to ice cream vendors who ran out of plates. By all accounts, waffle makers and ice cream vendors were both plentiful at the fair, and the idea of eating ice cream from an edible cone really caught on there.