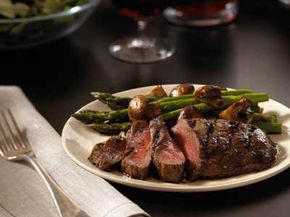 What’s for dinner? If you live in the U.S., it could be a steak; the United States leads the world in beef consumption. See a step-by-step guide to grilling steak.
Annabelle Breakey/Photodisc/Getty Images

For the backyard chef and the experienced foodie alike, nothing means luxury like a fine steak, with melt-in-your-mouth tenderness and rich flavor.

Although "steak" can designate the meat of several different animals, in the U.S. it almost invariably means beefsteak. Steak comes in a variety of cuts and grades, and it also offers a surprising range of flavors and textures. Some of these qualities depend on preparation; others depend on how the cow was raised and when it was slaughtered.

Typically to make a steak, the meat is butchered in cross-section -- the cut is perpendicular to the muscle fibers, or grain [source: Oklahoma State University]. The meat is marbled -- that is, it contains a certain amount of fat. In many cases, marbling leads to tenderness and flavor [source: Chu]. There is some debate about the quality of marbling, as well as the relationship between marbling and the diet of the cow [source: Time].

For anyone who used to struggle with the spelling difference between "stake" and "steak," it should come as a comfort to learn that the words are actually related. "Steak" comes from a root meaning "to roast on a stake" [source: Merriam-Webster]. That's not the only way to cook a steak any more, but there's still something a bit primal about a perfect cut of beef. We do tend to associate steak with cowboys and manly men, and indeed, the United States leads the world in beef consumption -- just under 70 pounds (31.75 kg) per person, per year [source: Cattle Network]. By contrast, the figure is about 19 pounds (8.7 kg) in Japan -- less than one-third as much [source: AsiaKan]!

In this article, we'll look at the different varieties and cuts of steak on the market today. You'll also learn some facts and opinions on the all-important topic of cooking steak. But first, let's head over to the farm, for a look at how cattle-raising methods affect flavor.

Most cows raised in the U.S. are Angus, Hereford and Shorthorn. "Certified Angus Beef" is a marketing term, but an effective one; it applies to most of the beef in U.S. stores [sources: Miller, The Nibble].

A cow's diet has a major role in the flavor of beef. In the U.S., most commercially available beef -- the flavor you're most likely used to -- is corn-fed or grain-fed (usually "grain" denotes corn and soy). This usually means it has been raised on a feedlot.

A growing school of thought opposes grain- and corn-fed beef, on the grounds that these foods are not part of the natural diet of cows. Corn, in particular, can lead to health problems, which is one of the reasons it is so often combined with antibiotics. But the antibiotics themselves are implicated for a whole host of health problems, including new strains of disease-resistant bacteria [source: Time].

The alternative is grass-fed beef. Grass-fed cows graze in pastures -- usually prairies left to grow their native grasses. Grass-fed beef tends to be less marbled than grain-fed beef and it's significantly lower in saturated fat. It has a distinctive flavor, which varies depending on the region and the kind of grass [source: Time]. This is the beef you'll usually encounter at South American steakhouses.

People who are concerned about health -- their own health, as well as the health of the planet -- often seek out beef that is free of growth hormones and antibiotics. By law, no beef may contain antibiotic traces when it is sold to consumers; that, however, doesn't mean it has been raised without drugs [source: Time].

Organic beef must have been raised without hormones or antibiotics. The cow must have been given organic feed [source: Tyree]. But "organic" can mean a lot of different things; sometimes it just means that the cow ate corn that had no pesticides. If you're looking for an environmentally friendly designation, "grass-fed" is actually more meaningful [source: Time].

Many beef producers voluntarily submit their beef to be evaluated by the USDA, which ranks beef according to its maturity and marbling. Prime beef, the top grade, comes from the youngest cows and has the most marbling (that is, the highest fat content). In descending order, the next grades are choice, select and standard.

On the next page, we'll take a look at the different cuts of steak.

Most Pampered Cows in the World

Japanese Kobe steak is a pricey luxury, so tender it can be eaten as sushi. Rumors abound that the cows receive massages, sake and beer. Look for "Kobe" rather than "Kobe-style" or Wagyu beef [source: Staley].

A cow is a very large animal. A typical cow yields more than 500 pounds (226.8 kg) of meat in various cuts [source: Gourmet Sleuth].

The fat content and tenderness of a cut depend on which part of the cow's body it comes from. Here are some of the most popular cuts:

After butchering, a cut is left to age, a natural process in which enzymes deteriorate in the meat, increasing tenderness. The best cuts are usually aged "dry" in controlled open-air environments. Dry aging results in smaller steaks with more intense flavor. Other cuts are "wet aged" or "vacuum aged" -- sealed into an airless plastic pouch [source: The Nibble].

After the steak has aged, it's time for the most exciting -- and most contentious -- part. Whether you like your steak charred to perfection or "so bloody it moos," head to the next page to learn about the different ways to cook a steak.

This classic dish involves coating steak in cracked pepper, sometimes along with other piquant flavors such as garlic and Dijon mustard. To avoid over spicing the meat, one cooking site recommends using a coffee grinder, rather than a peppermill, to ensure that the peppercorns are only coarsely crushed [source: Steaks Guide]. Just make sure to clean the grinder before you decide to make coffee.

Whether grilling, frying or broiling, cook steak over a dry heat source -- that is, don't use much oil or butter, if any. If you've marinated the steak, the oil in the marinade is probably sufficient. The dryness caramelizes sugars on the surface of the meat, which is the key to achieving a flavorful crust [source: Stradley].

Perhaps nothing provokes the passions of steak aficionados more than the issue of cooking temperature. Food safety and flavor walk a fine line here. Some chefs consider the food safety temperatures flavorless and too conservative. A chef gauges a steak's doneness with a meat thermometer, which should be inserted horizontally, from the side of the steak [source: Tyree]. The meat's color also reveals how thoroughly it has been cooked. But in general, don't slice open a cooking steak; you'll let out the juices, and with them, you'll lose flavor and tenderness.

Whether you like it rare or well done, the key to cooking a steak to the ideal degree -- and no more -- is to remove it from the heat before the meat is done. Let it rest for a few minutes before you serve it [source: Tyree]. The steak will continue to cook in its own juices for up to five minutes after leaving the heat source. In fact, its temperature will actually go up [source: Stradley].

Try pairing the steak with some steamed or sautéed vegetables and a side of sweet potatoes, and you have a balanced, gloriously flavorful meal.

To learn more, visit the links on the next page.

The cast-iron skillet is one aspect of kitchen technology that hasn't changed much in a few centuries. Solid, heavy cast iron conducts heat well and cleans up easily. Once it has been seasoned -- that is, a certain amount of grease has been cooked in, sealing the metal -- it's a no-fat, nonstick surface. Remember not to soak these invaluable kitchen tools -- they will rust [source: Stradley]. 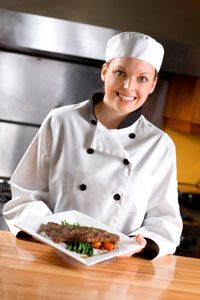 Up Next
How to Eat Steak on a Budget
Explore More 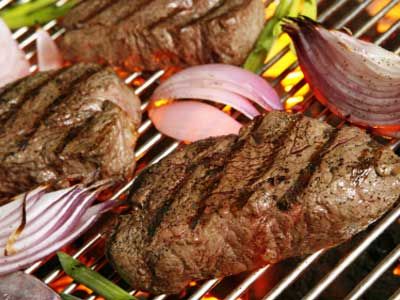 You May Like
How Black Angus Works
Explore More