Fruit of the Vine 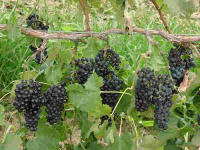 Grapes for winemaking are grown in many areas of the U.S., as well as other countries such as France, Chile and Australia. The major wine-producing area in the U.S. is California, which accounts for 80 to 90 percent of U.S. wine production. Many categories of winemaking grapes are grown throughout the country and include the following:

Typically, the type of grape that is used to make the wine gives the wine its name, such as Chardonnay, Cabernet Sauvignon and Zinfandel. However, some wines are blends of various types of wines, such as a Semillon Chardonnay. The blending of various wines to produce a given flavor is part of the art of the winemaking.