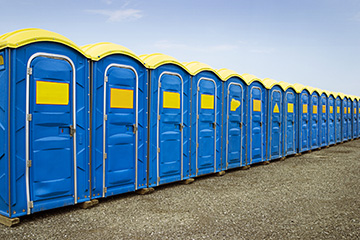 Porta-potties are different than outhouses. Outhouses and other types of "outdoor plumbing" have been around for centuries and amount to a semi-permanent structure placed over a deep earthen pit. Portable toilets, on the other hand, are self-contained units where human waste is stored temporarily in a holding tank and removed by some very dedicated people.

Like many other technological and engineering innovations of the 20th century, the portable toilet was born during World World II. The 1940s war effort required sturdy and sanitary temporary toilets that could be erected while constructing military bases or moving personnel into areas lacking infrastructure [source: PSAI].

Early generations of porta-potties were big, heavy structures made out of wood or metal, and were a challenge to transport from site to site. The rise of plastics and other strong, lightweight polymers revolutionized the industry. Porta-potty pioneer Harvey Heather is credited with designing the first one-piece fiberglass unit, called the Strongbox, in the late 1970s [source: Kneiszel].

The fiberglass Strongbox was just as sturdy as wood or metal, but much easier to clean and lighter to transport. But the one-piece molded design also had its drawbacks. The thick, dark material didn't let in any natural light, and the units weren't designed to be stackable on flatbed trucks, which increased the cost of transport from factory to customer [source: Kneiszel].

Modern portable bathrooms have come a long way since the Strongbox. Today's standard porta-potty has a white translucent roof to let in natural light, a non-slip floor to prevent accidents, and a ventilation system designed to route nasty odors up and out of the holding tank. Basic models even have a separate urinal and an antibacterial gel dispenser for improved sanitation.

Some construction sites require specialty potties. What if you're working 40 stories up on a high-rise and nature calls? A unit called a "roll-around toilet" is a miniature porta-potty on wheels that can easily fit into a construction elevator or be hoisted by a crane.

Next we'll answer the million-dollar question: 'What's inside the tank?