by Becky Striepe
NEXT PAGE 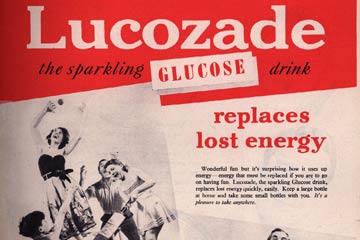 A 1953 ad for Lucozade when it was originally sold as a health drink, rather than a sports drink. See some sports pictures.
Picture Post/Hulton Archive/Getty Images

A glance at the beverage aisle in any supermarket makes it pretty clear that sports drinks are growing in popularity. You can find a myriad of brands and flavors, and they all promise to improve performance, but who invented these brightly colored beverages? Were they always neon-colored with names like Arctic Blast? And does your average exerciser need sports drinks to replenish during or after a workout?

Gatorade generally gets credit as the first sports drink, but there was actually a sports drink on the market in the U.K. decades before this iconic brand: Lucozade.

A chemist named William Owen developed Lucozade in 1927, and the initial purpose of the glucose-and-water mixture was to provide an easy source of calories and energy for people who were ill. In fact, because of the glucose, the drink was originally called "Glucozade," until he changed the name in 1929. The brand was bought by the company Beecham Group in 1938, which merged with SmithKline in 1989 [sources: Brand Republic, Hawkes].

The reason that Lucozade doesn't get the first sports drink cred it deserves falls almost entirely on a marketing problem. It wasn't until the mid-1980s that the manufacturer realized that it could sell Lucozade as more than just a drink for sick people. The company repositioned the brand as a drink to replace lost energy, developed new flavors, and starting pulling in millions in sales [source: Brand Republic]. It's now the No. 1 selling sports drink in the U.K. [source: Lucozade].

But Gatorade was the one that sparked today's lucrative sports drink market. It also was the first drink developed specifically to support athletes in training.