The History of Gatorade 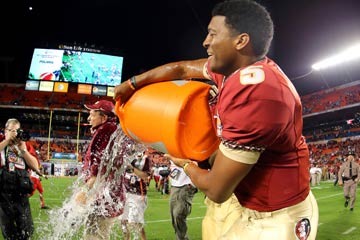 Jameis Winston of the Florida State Seminoles dumps the Gatorade bucket on head coach Jimbo Fisher after the Seminoles won the 2013 Orange Bowl. The "Gatorade dunk" sports tradition has been around since the 1980s.
Mike Ehrmann/Getty Images

In 1965, University of Florida (UF) football coach Dwayne Douglas noticed that his players were losing a lot of weight during training and games, some up to 18 pounds (8.1 kilograms)! They weren't urinating, despite drinking a lot of water, and players were suffering from heat stroke. Douglas teamed up with Dr. Robert Cade -- a kidney disease specialist at UF -- to talk the problem out. Cade worked with UF's College of Medicine to develop a drink to replenish what these athletes were losing through their sweat: carbohydrates (aka sugar), salt and electrolytes. Electrolytes are a set of minerals that your body needs to maintain healthy fluid levels and regulate its muscle function [source: MedlinePlus].

By the time Cade -- the drink's inventor -- was ready to test his concoction, the Gators (the UF football team) had a new coach: Ray Graves. Cade and his research team formulated a drink that was essentially water with salt and sugar in it. Makes sense, right? Your salt and sugar are depleted, so drinking a salty, sugary drink should help get things back in balance.

The only problem was that the drink was disgusting, so Cade's wife proposed adding lemon juice to make it a little more palatable. In 1966, the Gators started drinking Gatorade during hot summer practices and not only did the weight loss problem improve, but they also saw a significant drop in the number of players hospitalized for heat exhaustion. Cade also credited the drink with his team's 8-2 record that season [source: Kays].

In the fall of 1967, Stokely-Van Camp Co. became Gatorade's distributor until it was acquired by Quaker Oats in 1983. Pepsi -- which acquired Quaker Oats in 2001 -- now produces and markets Gatorade, but the UF has made more than $100 million from the drink since Cade invented it back in 1965 [sources: Gordon, Kays]. In 2011 alone, Gatorade and its sub-brand G2 made $1.3 billion in sales, and that's just one of a myriad of sports drinks on the market today [source: Edwards]. There's also Powerade (made by Coca-Cola), vitaminwater, Muscle Milk, Propel and Mio Energy.

Even Gatorade has branched out with new varieties over the years, rebranding itself as "G" and adding sub-brands like the low-calorie G2 and Gatorade Recover.