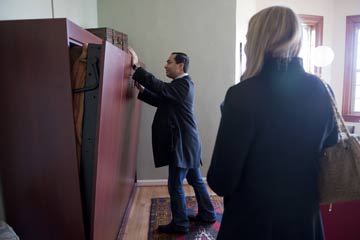 Ever stayed in a hotel suite and flipped a coin to see who would stay on the sleeper sofa for the night? No one wanted to be the loser because the pullout mattress was usually uncomfortable. Thankfully, that's changing.

The idea of a convertible bed isn't a new one. Ancient Egyptians fashioned daybeds by lashing palms together [source: Design Boom]. Thomas Jefferson recessed beds into alcoves at the home he called Monticello; some surmise he used a rope and pulley system to draw the beds upright when not in use [source: Thomas Jefferson Foundation]. George Washington's Mount Vernon guests slept on a settee that could morph into a bed [source: George Washington Wired].

In 1885, a double-duty bed made its first appearance in the U.S. patent office. Sarah E. Goode, a former slave, became the first black woman to receive a patent when she designed a folding bed that could fit into a writing desk. The idea was prompted during conversations with the apartment-dwelling customers of her Chicago furniture store who lamented about a lack of space-saving furniture. Although there's no evidence the design was mass-produced, it does appear to be the forerunner of modern folding beds [source: California State Polytechnic University].

Today, there are dozens of patents for sofa beds, but most have basic features in common, including a folding mattress and frame. Traditional sofa bed mattresses extend to 72 inches (1.8 meters) in length, and the most common sofa bed sizes correspond with standard mattress sizes, such as queen and full. Custom sofa bed sizes can be larger (king) or smaller (twin).

As with most well-accepted designs, sofa beds come in several variations, from inexpensive futons with fabric-covered mattresses to expandable chaise lounges.