We could argue that the first computer was the abacus or its descendant, the slide rule, invented by William Oughtred in 1622. But the first computer resembling today's modern machines was the Analytical Engine, a device conceived and designed by British mathematician Charles Babbage between 1833 and 1871. Before Babbage came along, a "computer" was a person, someone who literally sat around all day, adding and subtracting numbers and entering the results into tables. The tables then appeared in books, so other people could use them to complete tasks, such as launching artillery shells accurately or calculating taxes.

It was, in fact, a mammoth number-crunching project that inspired Babbage in the first place [source: Campbell-Kelly]. Napoleon Bonaparte initiated the project in 1790, when he ordered a switch from the old imperial system of measurements to the new metric system. For 10 years, scores of human computers made the necessary conversions and completed the tables. Bonaparte was never able to publish the tables, however, and they sat collecting dust in the Académie des sciences in Paris.

In 1819, Babbage visited the City of Light and viewed the unpublished manuscript with page after page of tables. If only, he wondered, there was a way to produce such tables faster, with less manpower and fewer mistakes. He thought of the many marvels generated by the Industrial Revolution. If creative and hardworking inventors could develop the cotton gin and the steam locomotive, then why not a machine to make calculations [source: Campbell-Kelly]?

Babbage returned to England and decided to build just such a machine. His first vision was something he dubbed the Difference Engine, which worked on the principle of finite differences, or making complex mathematical calculations by repeated addition without using multiplication or division. He secured government funding in 1824 and spent eight years perfecting his idea. In 1832, he produced a functioning prototype of his table-making machine, only to find his funding had run out.

But, as you might have guessed, the story doesn't end there.

Charles Babbage and the Analytical Engine 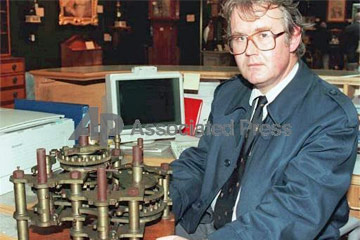 A museum buyer poses with his prize -- Charles Babbage's Difference Engine No. 1. The first section consists of a series of cogs and gears designed to add up as a replacement for inefficient figure tables. Six sections of the machine have survived.
AP Photo/Rebecca Naden

Some people might have been discouraged, but not Babbage. Instead of simplifying his design to make the Difference Engine easier to build, he turned his attention to an even grander idea -- the Analytical Engine, a new kind of mechanical computer that could make even more complex calculations, including multiplication and division.

The basic parts of the Analytical Engine resemble the components of any computer sold on the market today. It featured two hallmarks of any modern machine: a central processing unit, or CPU, and memory. Babbage, of course, didn't use those terms. He called the CPU the "mill." Memory was known as the "store." He also had a device -- the "reader" -- to input instructions, as well as a way to record, on paper, results generated by the machine. Babbage called this output device a printer, the precursor of inkjet and laser printers so common today.

Babbage's new invention existed almost entirely on paper. He kept voluminous notes and sketches about his computers -- nearly 5,000 pages' worth -- and although he never built a single production model of the Analytical Engine, he had a clear vision about how the machine would look and work. Borrowing the same technology used by the Jacquard loom, a weaving machine developed in 1804-05 that made it possible to create a variety of cloth patterns automatically, data would be entered on punched cards. Up to 1,000 50-digit numbers could be held in the computer's store. Punched cards would also carry the instructions, which the machine could execute out of sequential order. A single attendant would oversee the whole operation, but steam would power it, turning cranks, moving cams and rods, and spinning gearwheels.

Unfortunately, the technology of the day couldn't deliver on Babbage's ambitious design. It wasn't until 1991 that his particular ideas were finally translated into a functioning computer. That's when the Science Museum in London built, to Babbage's exact specifications, his Difference Engine. It stands 11 feet long and 7 feet tall (more than 3 meters long and 2 meters tall), contains 8,000 moving parts and weighs 15 tons (13.6 metric tons). A copy of the machine was built and shipped to the Computer History Museum in Mountain View, Calif., where it remained on display until December 2010. Neither device would function on a desktop, but they are no doubt the first computers and precursors to the modern PC. And those computers influenced the development of the World Wide Web.

The Programmer and the Prophet

If Charles Babbage was the genius behind the Analytic Engine, then Augusta Ada Byron, or Ada Lovelace, was the publicist (and, arguably, the very first computer programmer). She met Babbage at a party when she was 17 and became fascinated by the mathematician's computer engine. From that chance meeting grew a strong, dynamic relationship. Ada discussed Babbage's ideas with him and, because she was gifted in mathematics, offered her own insights. In 1843, she published an influential set of notes describing Babbage's Analytical Engine. Ada also added in some sage predictions, speculating that Babbage's mechanical computers might one day "act upon other things besides numbers" and "compose elaborate and scientific pieces of music of any degree of complexity …"