Who invented the elevator? 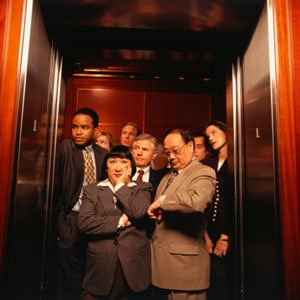 The next time you're playing the waiting game, consider how the elevator came to be.
Keith Brofsky/Photodisc/Thinkstock

While you're zoning out in an elevator, waiting to reach your floor, do you ever wonder who came up with the idea? Probably not. We just expect to have safe, working elevators in multistory buildings -- and we get pretty irritated when we have to take the stairs instead. While there is one person typically credited with the invention, it's naturally more complicated than that.

Elevators existed as far back as ancient Rome; Archimedes was building them in 336 B.C., and gladiators and animals rode lifts to the Roman Coliseum arena by A.D. 80. Of course, those early "elevators" weren't enclosed cars. They were simple platforms and hoists, typically used to perform tasks such as raising up water for irrigation or lifting heavy building materials such as stones. These lifts were powered by animals, people or even water wheels.

What we're really talking about is the modern passenger elevator. The first one was built for King Louis XV in 1743 and was called "The Flying Chair." Installed on the outside of the king's palace at Versailles, his elevator went from the first to the second floor (linking the king's apartment to that of his mistress).The king entered it from his balcony, and then men stationed inside a chimney raised and lowered the elevator through the use of ropes and pulleys.

Elevators became more common in the mid-1800s during the Industrial Revolution when they transported freight in factories and mines. These elevators were often based on the hydraulic system. A piston inside a cylinder used pressure from water or oil to raise and lower the car. The drawback was that buildings with hydraulic elevators needed to have pits below the elevator shaft so that the piston could draw completely back. The higher the building was, the deeper the pit had to be. This design was impractical for very tall buildings, although it became popular in mansions because it could operate off the public water system.

Another elevator design (and the one found most often today in passenger elevators) uses a cable system, in which ropes raise and lower the car by means of a pulley and gear system. A counterweight, raised and lowered at the same time as the car, works like a seesaw and helps to conserve energy. These types of elevators are easier to control, and buildings that have them don't need the extra room required by hydraulic systems.

By the 1850s, these types of elevators were powered by water pressure or steam, but they still weren't very common. Read on to find out why -- and how the person who solved the problem may or may not be considered the inventor of the elevator.