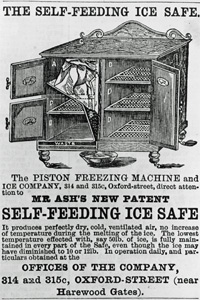 An 1874 advertisement for the Piston Freezing Machine. By our estimate, the freezer looks like it could easily house your emergency stash of Popsicles, french fries and peas.
Hulton Archive/Getty Images

You might hate dragging your groceries home and loading them in the fridge, but you can take solace in the fact that keeping food cold once was a much more complicated ordeal. Need proof? Just take a peek at Thomas Jefferson's diary, which chronicles the process of maintaining the ice house at the Monticello Estate. Every winter, Jefferson brought in more than 60 wagonloads of ice from the nearby Rivanna River to keep his ice house filled [source: Monticello]. Despite the trouble and expense of keeping it stocked, Jefferson's ice house was an incredible luxury. Most people resorted to canning, pickling and salting their food to preserve it. If they were intent on keeping food cold, they might rely on nearby rivers and springs, cold night air or snow-packed cellars to keep things chilly. Clever? Yes. Convenient? No.

While Jefferson was busy keeping his ice house stocked, fellow founding father Benjamin Franklin was inching us toward the invention of the refrigerator. Working with chemist John Hadley in 1758, Franklin experimented with the effects of evaporation on temperature. By repeatedly swabbing ether on a thermometer and allowing it to evaporate, the pair was able to drop the thermometer's temperature to well below freezing [source: Isaacson].

Another prolific American inventor, Oliver Evans, would take the principles developed by Franklin and others and draw up a design for a refrigerator in 1805 [source: Haley]. Evans' first love, however, was the steam engine, so he set his plans on ice while he spent his energy developing things like a steam-powered river dredger. Thankfully, however, Evans' design didn't go to waste.

While in Philadelphia, Evans became friends with a young inventor called Jacob Perkins. Even as a teenager, Perkins displayed remarkable ingenuity, inventing a way to plate shoe buckles at the age of 15. The precocious inventor saw the promise in Evans' work on refrigeration, and he took Evans' design and began modifying it, receiving a patent on his own design in 1834 [source: The Heritage Group]. Perkins then persuaded a man named John Hague to construct the machine, and the refrigerator was born.

Created more as an experiment than something fit for commercialization, Perkins' product certainly had room for improvement. For instance, since Freon wouldn't be invented for another century or so, early refrigerators like Perkins' used potentially dangerous substances such as ether and ammonia to function. Still, his device did manage to produce a small quantity of ice by drawing on the same fundamental principles used in modern refrigeration.

Following Perkins' success in creating a functioning fridge, other inventors moved the device rapidly toward commercialization. As for Perkins, he retired soon after inventing the refrigerator and died in 1849, never witnessing the tremendous impact his invention had on modern life [source: Heritage Group]. 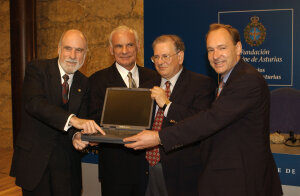 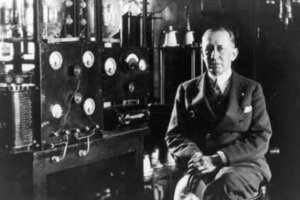