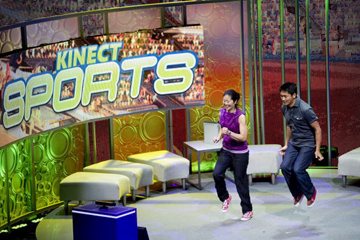 Long before the days where we could play video games without an actual controller, we had simpler versions such as Tennis for Two, courtesy of one William Higinbotham. See more video game system pictures.
Michal Czerwonka/Getty Images

In 2011, the video game industry pulled in $17.01 billion for physical software, making its way into many, many households globally in the process [source: Brightman]. How did the gaming juggernaut get its start? The answer is surprisingly complicated. In the late 1940s, Thomas T. Goldsmith Jr. and Estle R. Mann patented the descriptively named Cathode-Ray Tube Amusement Device, an electronic device incorporating screen overlays that users would hold while playing a few basic games.

In 1958, William Higinbotham created another notable precursor to modern video games while working at the U.S. Department of Energy's Brookhaven National Laboratory. The simple diversion, called Tennis for Two, was displayed on an oscilloscope. Imagine one of those screens you might see hooked up next to a patient's bedside with a very basic video game on it, and you've got it.

Although these and other electronic games captured audiences and imaginations across the country, the first true video game -- one that transformed electronic signals into pictures on a screen by way of something called a raster pattern -- wouldn't come along until 1967. That's when an engineer named Ralph H. Baer created the first prototype of what would later become the Magnavox Odyssey, a groundbreaking video game console that, along with countless imitators, would spark the video game craze of the '70s [source: The Lemelson Center].

Today, Baer is widely referred to as the "Father of Video Games," quite a distinction for someone who began his career as a radio technician in the early '40s. After serving as a small arms expert throughout World War II, Baer enrolled in the American Television Institute of Technology, graduating with a degree in television engineering. In 1951, Baer found himself tasked with designing the "world's best television" for a television company named Loral. Wanting to make the television stand out against the competition, Baer proposed building an electronic game into the television set, but the concept proved too outlandish for his manager to approve.

Fortunately for the legions of gamers out there, the story doesn't stop there.

Ralph Baer and His Brown Box 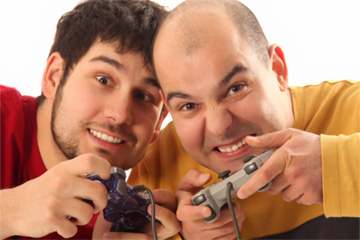 Gentlemen, you owe Ralph Baer, along with a few other pioneering minds, a debt of gratitude for those daylong gaming sessions.
iStockphoto/Thinkstock

Baer would have to wait for more than a decade before he could revisit the idea, this time as the chief engineer at defense contractor Sanders Associates. With the company's support and the help of fellow engineers William H. Harrison and William T. Rusch, Baer completed the first video game system in 1967 [source: The Lemelson Center].

Unlike its predecessors, Baer's system was compatible with ordinary television sets. One prototype followed another, with each new design capable of playing more complicated games. By the time the seventh and final prototype, known internally as Brown Box, was completed in 1968, Baer's team also had developed several games for the system. In addition to Chase Game, where players chased each others' squares around the screen, and a "ball and paddle" game that would later inspire the creation of Atari's Pong, Baer's team developed a checkers game, several sports ones and even a shooting game that used a rifle peripheral.

After putting the finishing touches on Brown Box, Baer began searching for a company willing to take his video game system to the public. In 1971, Magnavox became the first licensee of Baer's "TV Game" and developed the Odyssey home video console based on the technology. Like Baer's Brown Box, the Odyssey came with two paddle controllers and an optional light-sensing rifle peripheral. The system also came with colorful plastic screen overlays that allowed players to play "color" video games, as well as poker chips and other board game accessories. The system was a huge success, selling more than 700,000 units for the company over the next three years, despite the widespread misconception that the console would only work on Magnavox television sets [source: The Lemelson Center].

For some, garnering the title "Father of Video Games" would be enough, but Baer continued to develop electronic toys and games for years to come. In 1978, for instance, Baer created the runaway hit Simon game for Milton Bradley, becoming part of pop culture in the process. Today, Baer is still drawing new designs and reviving old ones, having most recently recreated a putting peripheral originally designed for the Magnavox Odyssey.

Keep reading for more links to inventors and their crazy ideas.