Do backscatter X-ray systems pose a risk to frequent fliers? 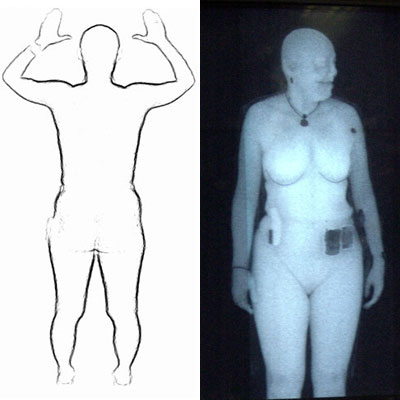 Left: The type of image the test system in Phoenix is producing; Right: What Z Backscatter is capable of
Image courtesy AP

If you were pulled out of line at an airport security checkpoint and asked to choose between a pat-down and a very revealing X-ray, which would you choose? In a three-month trial that began in the Phoenix Sky Harbor International Airport on February 23, 2007, most passengers chose the X-ray, known as the Z Backscatter X-ray system. Backscatter technology can detect objects that regular X-ray scanners and metal detectors can't pick up very well, like ceramic knives, drugs and liquid explosives.

This is the technology that caused a privacy uproar when it was first revealed as a possible addition to airport security. The backscatter X-ray scanner sees through clothes and is capable of producing photo-quality views of its subject. So in theory, passengers selected for additional screening with the backscatter system could be subjecting themselves to a peep show by airport employees.

The backscatter system works differently than the usual X-ray scanners that check out your carry-on luggage.

The X-ray scanners we send our carry-on bags through are usually dual-energy X-ray systems. In this type of system, the X-ray source sends out a single X-ray beam. Different types of materials -- organic, inorganic and metallic, for instance -- react differently to X-rays, which are basically very high-energy light photons. Depending on the density and atomic properties of an object, it may absorb X-rays, let X-rays pass right through or scatter the X-rays on impact. Organic material, like skin, bananas and liquid explosives, tend to let X-rays pass through them. In a dual-energy system, after the X-rays interact with the objects in your carry-on bag, they reach three barriers: a detector that picks up the pattern created by both high- and low-energy absorption and pass-through; a filter that then removes the lower-energy X-rays; and then a high-energy detector, which picks up the pattern of the high-energy X-ray absorption and pass-through. A computer program then compares the images from the two detectors in order to provide a very clear, color-coded image of the different types of materials in your bag. It's the comparison of the first detector's image with the last detector's image that highlights the "low-energy objects" -- mostly the organic stuff -- in the bag.