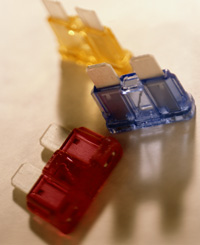 Small auto fuses like these help to make sure none of your car's electrical wires overheat. See more fuse pictures.
Steve Cole/Photodisc/Getty Images

­A blown fuse can mean a bad day, especially if it's a component of some critical electrical system, like your car's horn during rush hour. But does blowing a fuse automatically mean a trip to an auto parts or hardware store?

In this article, we'll look into whether there's any truth to the rumor that a chewing gum wrapper can provide an ingenious fix for a blown fuse. But first, let's take a closer look at those pesky but protective little plugs. Fuses have been around since the 1800s and come in various shapes and sizes. What they all have in common is the capacity to keep wire from overheating. A fuse generally has two metal prongs that make contact with the wire on either side. In the middle of the fuse's fireproof protective casing is a conductive metal with a specific melting point -- one that's a lower temperature than the wire's. This way, if an electrical current is approaching a temperature that's too hot for the wire to handle, the fuse will be the first to know. It interrupts the current by melting and breaking the connection.

Fuses commonly are categorized by how much amperage (amount of electrical current) the fuse can handle. If the current flowing through a wire gets too hot, it could start a fire, so it's important to use a fuse with the correct amp rating. For more information on the protective electrical veins that run through mechanical devices and the critical junctions that connect them, read How Wires, Fuses and Connectors Work.

Circuit breakers are similar to fuses and perform the same basic function. While circuit breakers build on fuse technology, pros and cons remain for both methods of preventing electrical overloads. For example, fuses are cheap, but they're also limited to onetime use, so they may need to be replac­ed frequently. Circuit breakers on the other hand, are easier to reset since they simply switch off rather than melt a wire, but they tend to be more expensive­. Circuit breakers are generally the norm in houses today, although some older homes may still have fuses.

­Replacing a fuse is easier than re­placing a whole wire, but is there a way to get around it entirely? Now that we have a little background, let's find out if there's any truth to the gum gossip.

To see the MythB­usters tackle more urban legends and mysterious myths like this one, visit the show's Web site or read Inside MythBusters. 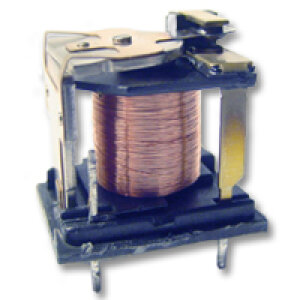