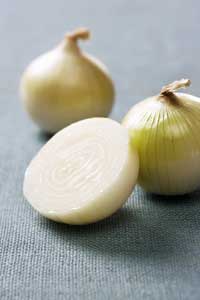 Can fruits and vegetables give your iPod the power it needs?
Lew Robertson/StockFood Creative/Getty Images

Sadly, our post-apocalyptic wanderer is in for a very disappointing evening. He or she will soon discover that attempting to power an iPod with a Gatorade-soaked onion doesn't work. Many Internet users ­today have made the same discovery after viewing the video in question, produced by the Web site HouseholdHacker.com.­

First, let's examine the idea of powering any electronic device with a fruit or vegetable. The concept is believable because you can create a battery with a few potatoes. This experiment is a science class favorite because it helps demonstrate how the galvanic cells that make up a car battery work.

Some batteries use galvanic cells to transfer chemical energy into electric energy. They depend on two metals, a cathode or positive terminal (such as copper) and an anode or negative terminal (such as zinc). These are placed in an electrically conductive solution that allows ions to travel freely between the two metals. The solution is typically an acid. Car batteries use sulfuric acid, but potatoes contain phosphoric acid, which also works. The acid steadily eats away at the zinc, a chemical reaction that releases spare zinc electrons. These electrons then join with spare hydrogen ions in the acid to create hydrogen gas.

Meanwhile, the copper isn't doing anything in its acid bath -- that is until you connect it directly to the zinc using a thin, conductive wire. The spare zinc electrons are still intent on forming hydrogen gas, but they have an easier time doing it with the hydrogen surrounding the zinc anode. So the electrons from the copper cathode travel through the wire to get to the zinc. Batteries exploit this flow of electrons, allowing us to use their combined electricity. To learn more, read How Batteries Work.

Potato batteries typically use a zinc galvanized nail and a copper penny. The two metals are stuck into the potato and connected with a conductive wire. The potato isn't the only supermarket item that meets the mandatory chemical requirements. You can conduct the experiment with any fruit or vegetable -- or an electrolyte solution such as Gatorade, which also contains phosphoric acid.­

While you'd risk damaging your iPo­d, you can connect your iPod to one of these fruit o­r vegetable batteries and get the device to register a charge [source: The Naked Scientists]. The Household Hacker method, however, falls flat for two main reasons:

­Hurt by Household Hacker's inaccuracies? Wipe away those onion tears. On the next page, we'll discover why someone would create such a misleading video.