Why do I need an electrical adapter when I travel overseas? 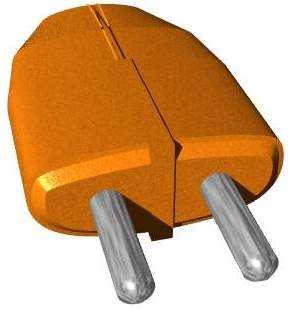 A typical plug in Europe.
HowStuffWorks.com

Although technology is helping to make the world seem a lot smaller, there are still major differences between countries. Electrical standardization is one area where not much has changed since the original national standards were set by each country. If you travel a lot, this can make things very frustrating!

The United States and most of the Western hemisphere use electrical systems operating at 110-120 volts. Almost every other country uses 220-240 volts as a standard. The 110v systems have a 60Hz cycle while most of the 220v systems operate at 50Hz. This difference in cycles per second is not normally a big deal but it can make certain items like electric clocks run faster or slower. With a few exceptions, most notably Brazil and South Africa, alternating current (AC) is the method used to deliver electricity. But be aware of those countries that use direct current (DC) -- it can easily destroy any equipment plugged in that wasn't made to operate in that system.

There are three items you may need to switch between the different power systems:

The adapter is simply a connector that changes the plug shape to match the outlet. It does not change the voltage or electrical output in any way. If you know that the plug shape is the only difference between your equipment and the electrical system you are planning to use, then an adapter is all you need. Some items come with ability to use either 110v or 220v built right in. In fact, most computers now have smart power supplies that are switchable between the two. Look at the different plug shapes shown below for various countries.

If your equipment requires a specific voltage, then you need a converter or a transformer. Converters use an electronic switch to approximate 110v by rapidly cutting on and off the current received from a 220v source. This is okay for some electrical items like hair dryers but not good for anything electronic (something with a computer chip in it). Also, converters should not be used for anything that is going to be plugged in longer than a few minutes.

Electronic items need a transformer. You will also want to use a transformer if you are stepping up from 110 to 220. Where a converter would simply limit the amount of electrical output without really reducing it, a transformer actually reduces the voltage of the electricity going through it. This is a very important distinction. Always use a transformer with electronics!

For more information and interesting links, see the next page.