by Molly Edmonds
Prev NEXT
4 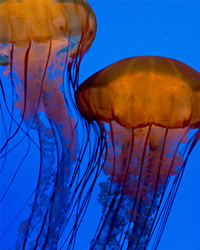 It's hard to imagine a time when friends and family won't meet up for a bite to eat, so of course we're including dining out on our list. However, don't plan on heading to a local steakhouse or burger joint. Because of factors including land use, population and water supply, the American diet will undergo some changes by 2050. We'll be eating a lot more grains and beans and a lot less meat and dairy. We'll still eat our veggies, of course, but we won't have the wide array to choose from that we enjoy today. Futurists estimate that about 15 percent of our diet will be from animal products, and the rest will be from plants; the United States as a whole may have to stop exporting food by 2025 [source: New York Times].

If a juicy burger isn't an option, where will those animal products come from? One possibility is that we'll eat more fish, but we certainly won't be eating the tuna and cod that we're accustomed to. According to reports published in the journal Science in 2006, commercial fish stocks could be completely decimated by 2050 because of overfishing and pollution [source: Pearce]. Our fishing throws aquatic ecosystems off balance in irreparable ways; for example, by fishing for tuna, marlin and swordfish, we eliminate the major predators of jellyfish. As a result, jellyfish numbers are increasing rapidly, which may mean that we'll have to develop a taste for jellyfish sushi. Jellyfish have been eaten for thousands of years in Asian countries, but its taste may require some getting used to -- one biology professor described it as "tough strips of cucumber" [source: Williams]. One slightly more palatable option we might have in 2050 is squid, which unfortunately are very high in cholesterol.