Why do people sing in the shower? 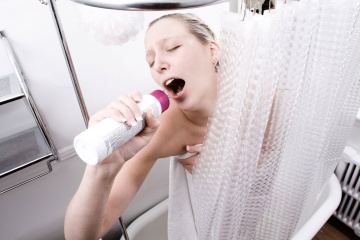 Feel no shame over your show-tune bathing ritual -- it's good for you!
©Jupiterimages/Thinkstock

Admit it. You've pulled a Ferris Bueller once or twice in your life while lathered up in the shower and grabbed the showerhead to bust out a tune or two. There's just something completely satisfying about singing in the shower. Even celebrities sing in the shower. Actor Jack Black likes to belt out Led Zeppelin. Wyclef Jean digs a little Bruce Springsteen. Colbie Caillat warms up her voice in the shower with a little Amy Winehouse [source: People].

Everyone's a rock star in the bathroom, whether you have a voice like Aretha Franklin or couldn't carry a melody if it had a handle.

Have you ever wondered about this phenomenon? Some of us wouldn't sing in public if someone paid us. Yet we'll sing in the shower without embarrassment. Believe it or not, there's a scientific explanation behind our soapy musical stylings.

First, let's look at why we're relaxed enough in the shower to burst into song. Think about it -- you don't sing when you're sad (unless you're singing the blues, of course). For many people, shower time is the only time they're alone all day. You're in a warm, small, safe environment. You're comfortable enough to be in the buff! Stress literally washes off you. When you relax, your brain releases dopamine, which can give your creative juices a jumpstart.

Warm water is rushing over you, and now you're relaxed and feeling good. It turns out that singing makes you feel even better. Singing, because of the breathing you put into it, gets more oxygen into the blood. This gives you better circulation, which in turn improves your body and mood. And because you have to breathe a little deeper to belt out a song, you get some of the same relaxation and mind-clearing benefits as meditation. Another neat thing is that when you're singing, you really can't think about your problems -- more stress relief.

But the best thing about singing in the shower? The acoustics! You can't ask for a better sound system than a bathroom. Because bathroom tiles don't absorb sound, your voice bounces back and forth around the room before fading away. And because the shower is a small space, it boosts your voice and even adds a little bass, making your singing sound more powerful. The sound bouncing also gives your vocal styling a reverb effect, which makes your voice hang in the air longer and evens out variations in your singing. Think of this as a primitive Auto-Tune -- it makes you sound better than you actually are, which is a confidence boost.

We don't sing in the shower simply because we have "Call Me Maybe" stuck in our heads. It turns out we do it for many reasons: stress relief, happiness, great acoustics, or maybe just because we like to hear our own voices. No matter what the reason, keep it up. It's good for you. And if you've never tried it, pick a song, grab the showerhead and put on your own private concert.

Why are humans altruistic?
5 People Who Can't Seem to Stay Buried
This Tree Is Europe's Oldest Living Organism — Sort of, Kind of, Maybe