Inside the Venus Flytrap 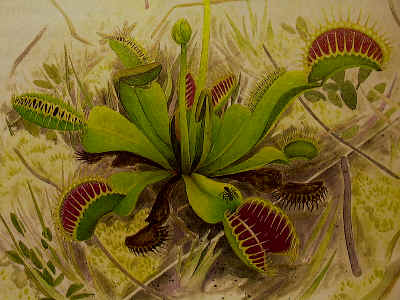 Carnivorous plants have to be able to:

All of these steps are accomplished through simple mechanical and chemical processes. Unlike us, plants don't have a brain or nervous system to coordinate their physiological functions and tell them that they are hungry so they should go buy a burger from the nearest fast food place. Plants also don't have complex muscles and tendons to grab food, chew it, swallow it and process it. The Venus Flytrap completes the entire process by way of a specialized set of leaves that is both mouth and stomach in one.

Most plants have some mechanism to attract animals and insects, regardless of whether or not they plan to feast on their guests. For example, non-carnivorous plants have evolved intense smells or syrupy saps to attract bees, butterflies and other insects; these bugs are then used by the plants to ferry the pollen needed to fertilize neighboring plants of the same species. In the case of the Venus Flytrap, the leaves forming the trap secrete a sweet nectar that draws in insects searching for food.

When an insect lands or crawls on the trap, it is likely to run into one of six, short, stiff hairs on the trap's surface. These are called trigger hairs, and they serve as a primitive motion detector for the plant. If two of these hairs are brushed in close succession, or one hair is touched twice, the leaves close down upon the offending insect within half a second.

What causes the leaves to squeeze shut? Nobody knows exactly how the sequential, mechanical stimulation of the trigger hairs translates into closing the trap. The prevailing hypothesis of the day is that:

Even without a brain to analyze what it's eating, the Venus Flytrap still manages to differentiate between insects and non-edible debris that might fall into its trap. This step is also mediated by the six sensitive trigger hairs. An insect caught inside the partially closed trap will continue to thrash about in an attempt to escape. It's guaranteed that at least one (if not all) of the trigger hairs will be tweaked by the insect's movement. This serves as the signal to close the trap entirely.

Inanimate objects like stones, twigs and leaves that fall into the trap, or objects that are placed there (what child can resist sticking the tip of their pencil into the trap to watch it close?), will not move around and fire the trigger hairs. If there is no further stimulation of the hair, the trap stays in its partially shut state until tension can be re-established in the leaves of the trap. This process takes about 12 hours, at which point the leaves spread apart again. The unwanted object either falls out as the leaves re-open or is blown out by the wind.

The selection process obviously isn't perfect; while the trap is out of commission, real food in the form of flies and spiders may be crawling all around the plant. Imagine if you had to sit with a chicken bone or peach pit in your mouth for 12 hours while the rest of your dinner sat on the table in front of you! The difference is that you are conscious of what you're eating, while the Venus Flytrap is a passive participant in choosing what it's going to eat for dinner. The process is actually a nifty way for the Venus Flytrap to get around two problems:

In the next section, we'll talk about the final characteristic of the carnivorous plant: digesting prey. Let's see what happens when the trap shuts on something edible.