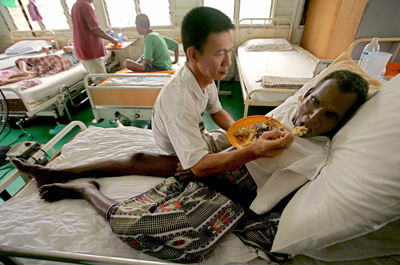 In 2006, as many as 3.5 million people died from acquired immune deficiency syndrome (AIDS), bringing the total of deaths from this disease since 1981 to more than 25 million [source: Avert.org].

Human immunodeficiency virus (HIV), the virus that causes AIDS, attacks healthy immune cells and uses them to duplicate itself. AIDS, the final stage of HIV infection, can weaken a person's immune system so much, he could die from a cold.

But there's hope for wiping out this disease, and it may be sitting in your e-mail inbox right now. Efforts to wipe out unwanted spam e-mails could provide the key to ending the AIDS epidemic. Researchers at computer software giant Microsoft are in clinical trials testing the same technology used to create spam-blocking programs against HIV.

Spammers -- people and companies who create junk e-mails -- have found that traditional spam-blocking software works off a list of flagged words. When spam blockers identify these words, they reroute affected e-mail from your inbox to your spam folder.

To get around this, spammers can simply spell words in a way that humans can recognize, but which computers don't. For example, if a spammer uses the word "pharmaceuticals," the e-mail will be blocked. But the spammer can spell "pharmaceutical" as "ph@rm@ceut1cal" to circumvent the spam filter.

Score one for the spammers.

Antispam developers realized that to combat this they would have to calculate all of the possible ways that every single word could be spelled using combinations of letters, symbols and numbers. With all of the different possible combinations for each, this adds up to a lot of work. But Microsoft researchers came up with a breakthrough.

The team developed an algorithm -- a mathematical formula -- that reduces the time it takes to come up with every possible combination for a set of words from one year down to a day. With this algorithm, the researchers are not only able to develop a top-notch spamware product, they have now set their sights on using that same algorithm to ridding the world of HIV.

David Heckerman, one of the Microsoft team's leaders, is not only a computer scientist, he's also a physician. He realized that the same theory used to block spam could also be used to kill HIV. After all, spam and HIV work in similar ways. When HIV attacks an immune cell, it creates thousands of replicas of itself. These aren't exact replicas, though. Each one is a slight variation on the original, and each of these goes on to attack more and more cells, each time replicating into mutated versions of the virus.

This makes it difficult to design a vaccine to kill HIV. To create a vaccine, scientists include antibodies that look for specific strains of HIV. Subtle mutations of the virus not targeted by the vaccine may survive, much as the spam blocker allows junk e-mail to pass through when it doesn't see any flagged words.

The Microsoft researchers hope to apply their antispam algorithm to HIV to calculate each possible HIV mutation. If they succeed, they can then provide HIV vaccine researchers with this data, and vaccines can include antibodies designed to kill all -- not just some -- of the mutated viruses.

Spam may prove to be the springboard for of the development of a vaccine for HIV, and strange as that may seem, this is not the first time computers working on something unrelated to medicine have helped medical researchers study the effects of disease. Read the next page to find out other ways in which the virtual world is helping epidemiologists.

Health education is one of the greatest tools in the fight against HIV/AIDS. In Malaysia, UNICEF works with soccer squads to teach players about the the deadly virus and how it works. This video from UNICEF has more information.

"World of Warcraft" and Epidemiology 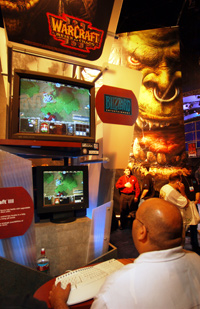 Since the discovery and rapid spread of HIV, epidemiologists -- people who study the spread of infectious diseases -- have been investigating its movement throughout the world. Epidemiologists create models to simulate the spread of disease, and predict how a given disease will spread. They take a wide array of factors into account -- everything from the way a disease spreads to how quickly infected airplane passengers would carry the bug around the world.

But there is one distinct problem that epidemiologists have always encountered in their models: They are merely predictions. Since they can't release infectious diseases into human populations and chart how they spread, the models must be built on information from past epidemics and subjective interviews. Epidemiologists recently identified another tool that had previously been unconsidered.

In 2005, Blizzard Entertainment, developers of the online game "World of Warcraft," created a new foe as a way to test their best players. One of his attacks was to cast a spell called "corrupted blood" -- a virtual virus [source: Wired]. Characters carried the infection from the remote locations where the battles were fought to populated towns and cities. Here the virus quickly spread beyond the creators' intentions and soon became a plague, killing many weaker characters. Eventually, the developers "cured" the disease. It became a bad memory among players, and mostly went unnoticed among those who don't play the game.

But it didn't escape the attention of some in the medical field. Rutgers University epidemiologists Nina Fefferman and Eric Longren realized that the data collected and kept by the game's developers during the plague could help to build better, more detailed epidemiological models.

The pair studied the reactions to the plague among "World of Warcraft" players, and what they found surprised them. Much of the behavior of the virtual characters (controlled by real people) was exactly like the way people behave toward disease outbreaks in the real world. Some listened to the developers' alerts to stay away from infected areas, as epidemiologists predict would happen with a real plague. But Fefferman and Longren were surprised to find that other people went out of their way to investigate the disease, putting their characters in danger to satisfy their curiosity.

They also found that some people with infected characters were determined to take as many people down with them as they could. They purposely infected others, behavior that has been seen by a few humans in real life. More players, however, put their characters' lives in danger to help others: Those with healing powers sought out infected characters in an attempt to cure them.

By studying the "World of Warcraft" plague of 2005, Fefferman and Longren were able to confirm some widely held epidemiological predictions. Other factors, such as the curiosity that compelled some players to put their characters at risk, show gaps in current disease-prediction models that can be improved upon.

Researchers realize that "World of Warcraft" doesn't provide a complete picture. To begin with, the players' behavior was based on the loss of their characters' lives, not their own, which could affect their actions. Nonetheless, studying virtual worlds may still provide valuable information to help epidemiologists expand their current disease-prediction models.

The plague of 2005 will ultimately provide a beginning point for virtual epidemiology. According to The Economist, Fefferman says Blizzard Entertainment will consider releasing more viruses into "World of Warcraft" for the purposes of scientific study. That may be bad news for some characters in "World of Warcraft," but potentially very good for humanity.

For more information on spam e-mail, HIV, AIDS and other related topics, visit the next page.