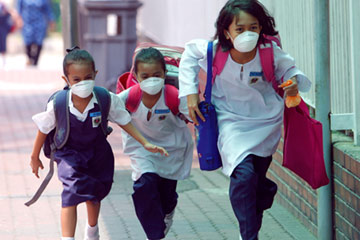 The weeks before heading back to school can be stressful for children. Will they like their new teachers and classmates? Do they have the right backpack or lunch box to fit in with the cool kids? How can they be expected to endure a long day of learning after a leisurely summer? And this year, kids and their parents have an additional worry: a possible spike in the rate of H1N1/2009 influenza, which is known by a variety of aliases but hasn't yet completely thrown off its original moniker of swine flu.

Worries about swine flu are nothing new; people have been concerned since the first case was found in a small town in Mexico in the spring of 2009. The fact that the rates of infection and death have held steady throughout the summer, a time in which cases of the flu usually drop off, is new, however. In June 2009, the World Health Organization (WHO) announced that the disease had reached global pandemic level, a distinction that refers to the spread of the condition, not its severity.

Kids have lived with the specter of swine flu throughout their time off at summer camps and swimming pools, but it's the return to school that has some public health officials worried. Not only are children well-known agents of infection when it comes to colds and flu, the timing coincides with the regular cold and flu season. In July 2009, the Centers for Disease Control and Prevention projected that 40 percent of Americans could contract swine flu in the next year, perhaps resulting in several hundred thousand deaths if a swine flu vaccine wasn't made available [source: Stobbe].

But to some, the fuss over swine flu is just much ado about nothing. Those who have had the disease report that it's nothing more than a mild flu, and while deaths have been reported, the casualties pale in comparison to the 36,000 Americans who die each year after suffering from seasonal flu [source: Ellenberg]. Sure, this strain of influenza may have a knockout combination of swine, avian and human influenza viruses that has never been seen before in humans, but the first wave didn't yield the damage that was once predicted. What's the big deal?

To understand why reactions to the 2009 H1N1 virus vary so widely, it's helpful to cast our eyes toward pandemics of years past. 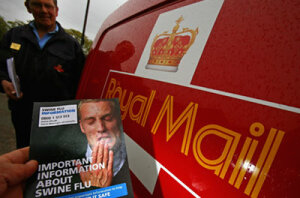 How do you know if you have swine flu or seasonal flu?