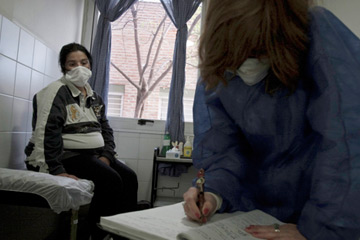 Swine flu symptoms, which are very similar to seasonal flu symptoms, include fever, cough, sore throat, stuffy or runny nose, body aches, headache, chills and fatigue. Additionally, a bout of the swine flu is more likely to include gastrointestinal ills, such as diarrhea and vomiting, than a case of seasonal flu. Generally, most people who have had the swine flu recover in about a week without needing any hospitalization or medical treatment.

There are only a few laboratories in the world that can distinguish a case of swine flu from seasonal flu; doctors can send a throat or nose culture to the labs to confirm the virus but are only doing so for certain groups at high risk of complications. People with pre-existing conditions like asthma, diabetes and heart disease are at greater risk of requiring hospitalization, as these conditions can be exacerbated by swine flu. Children younger than 5 and adults older than 65 are a concern in any flu pandemic, but as we mentioned, the latter seem to be doing fairly well so far. Of most concern to doctors right now are pregnant women.

It's not risk to the fetus that's so troubling about pregnant women with H1N1 -- rather, women themselves are at risk as their pregnancy progresses. This may be because women have decreased lung capacity as their fetus grows, which makes it harder for them to breathe even without the respiratory attack brought on by swine flu [source: DeNoon]. Additionally, pregnant women might already be more susceptible to viral diseases thanks to changes in their immune systems. It's important for pregnant women to see their doctors as soon as they suspect a case of the swine flu; the cases that have ended in death so far have involved women who postponed treatment out of fear of starting medications during pregnancy [source: DeNoon].

While you don't need to see a doctor for a diagnosis of swine flu, there are a few complications to be on the lookout for, regardless of whether you belong to a high-risk group or not. You need urgent medical attention if you have trouble breathing, severe vomiting or pain in the chest or abdomen. Another red flag: if your symptoms abate only to come back more severely. Additionally, be on the lookout for potential neurological complications. In children, these complications may show up in the form of seizures, extreme irritability or memory problems; adults might experience sudden dizziness or confusion. These symptoms need immediate medical treatment. But what treatment can someone with swine flu expect, and how does one avoid getting infected in the first place?