How did writing evolve?

Anthropologists and archaeologists love to get together to talk about the different characteristics that make up a civilized society. While the finer points are debated, there are a number of things that most researchers agree are necessary to draw such a distinction. In the mid-1930s, an archaeologist named V. Gordon Childe wrote a book called "Man Makes Himself," which named a few components that marked civilization. Among them are sailing ships, plows, wheels and draft animals, an irrigation system, standards of measurement and writing.

Most of the things that Childe and other researchers list are related in some way to the nuts and bolts of survival, or at the least, how to survive efficiently. Standards of measurement and writing both stand out as more cultural in nature. While you don't need writing to survive, it may draw the most distinct line between a civilized and an uncivilized society. In fact, some argue that writing became a necessity as a result of the advancement of civilization and then helped to drive that advancement after its evolution.

As populations made advancements in areas like agriculture and hunting, they began to trade with each other. Only so much business can take place without any system of recordkeeping. Trade survived for a while on a limited basis until man learned to write down transactions. It was the recording of business transactions that allowed trade to flourish and rise to the next level. The more people traded, the more writing had to advance to keep up. Most experts agree that the earliest writing was used largely for economics and accounting. But writing didn't stop there.

As populations grew and societies formed, writing became a useful tool to help people keep track of things. As rulers of these populations came into prominence, they demanded that their customs, laws and rituals be recorded. Once a system of recording history was put into place, there was no looking back. Man learned that having an official record of something was important to ensure its legitimacy, and as a result, writing is now regarded as the dividing line between pre-history and history. After writing became standard for recording history, accounting and keeping track of trade, literature was born, with the inscription of oral stories.

Toward the end of the fourth millennium B.C., the first true city was born: Uruk, in Sumer, part of Southern Mesopotamia and today's Iraq, known as the cradle of civilization. The complexity of a society that numbered as many as 60,000 to 80,000 required a standardized system of writing, again mainly for recordkeeping. Uruk is divided into 18 phases that span about 2,100 years. In phases three and four, we begin to see writing evolve from "proto-writing" to cuneiform, which has long been regarded as the first form of true writing.

For years, researchers largely agreed that because of the interaction between the two societies, writing spread from Mesopotamia to Egypt. The first examples of writing on clay tablets from Mesopotamia date to 3000 B.C. However, in 1995, the archaeological world was turned on its ear when an Egyptologist from Yale University found a clay tablet with the story of King Scorpion written on it. Dr. John Coleman Darnell unearthed the 18-by-20-inch tablet in the desert west of the Nile River. The tablet dates to 3250 B.C., some 150 years earlier than the first writings in Uruk. The symbols that made up the history of King Scorpion were likely scratched into the wet clay and then baked in the sun. Darnell and many of his colleagues believe this is proof that the first writing came from Egypt and not Mesopotamia. Some archaeologists theorize that writing may have evolved nearly simultaneously in both Egypt and Mesopotamia, instead of one society teaching the other. Curiously, near the site of the King Scorpion tablet, Dr. Darnell also found what may be the first example of alphabetic writing, dating to 1800 B.C. 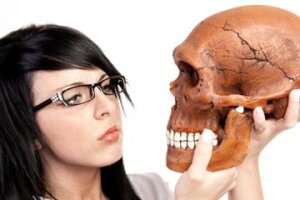