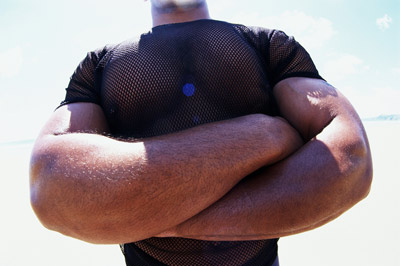 If gene doping were legal and safe, would professional athletes all look like this?
Peter Cade/­Getty Images

­Gene doping is against the rules in many sports. In 2003, WADA put gene doping on its prohibited list [source: USADA]. Many sports governing bodies accept and use the list, thereby prohibiting gene doping for athletes participating in the Olympics, Paralympics and many other events [source: WADA]. However, the list isn't used in Major League Baseball, the National Basketball Association or the National Football League [source: Associated Press].

Scientists and doctors who inject genes into healthy people violate professional ethical codes. Universities and hospitals could penalize staff members for performing a human experiment not approved by an ethics committee. If the athlete were harmed, the doctor could be sued for malpractice and lose his or her medical license, says Maxwell Mehlman, a law professor at Case Western Reserve University School of Medicine.

But that said, the United States has no laws specifically banning gene doping. Genes aren't controlled substances, like heroin or steroids, so until laws are made, competitive athletes or just regular gymgoers could probably inject themselves with genes without going to court or jail, says Mehlman.

The first argument is the risk to the individual athlete, though the procedures will become safer and more reliable over time, he says. Second is unfairness. "Some athletes will get access to it before others, especially in safe and effective forms," he says. Third is the risk to other athletes. If gene doping were allowed, and one athlete tried it, everyone would feel pressured to try it so as not to lose. An enhancement arms race would follow. "Only athletes willing to take the largest amounts of genetic enhancements in the most radical combinations would have a chance at being competitive. The outcome would most assuredly be a public health catastrophe. And once everyone tried it, no one would be better off."

­Finally, gene doping would change sports, Murray says. "Sports are in part constituted by their rules," he explains. "What if I showed up to the New York [City] Marathon wearing rollerblades?...Or suppose I came to the high jump wearing springs on my shoes…Or what if we let the pitcher stand as close to the batter as he wants?"

If these exceptions were allowed, the meaning of each sport would change, Murray says. The New York City Marathon would become a roller derby. The high jump would become a contest for finding the biggest springs. The baseball pitcher would stand next to the catcher, and the batter would bunt. "All the stuff we like about baseball -- the variety, the art of the double play, the great catches -- would disappear," Murray says.

Athletes and audiences should decide what they value in sports and whether allowing gene doping would dissolve those aspects, Murray says. "That will help us decide where to draw the line."

Keep reading to learn what other crazy uses people have thought up for their genes, like curing baldness.

Eero Mantyranta, a Finnish cross-country skier who won two gold medals in the 1964 Olympics, was born with a mutation in the erythropoietin receptor gene that allows his blood to carry significantly more oxygen than the average person's [source: McCrory]. Then and now, he wasn't breaking any rules.

Shipping might imperil a gene doping operation. Under the Federal Food and Drugs Act, it's illegal to ship a drug across state lines that hasn't been approved by the U.S. Food and Drug Administration (FDA) for human use. If a gene product isn't approved for humans, shipping it is a felony, and the shipping party can be fined and imprisoned, says Mehlman.