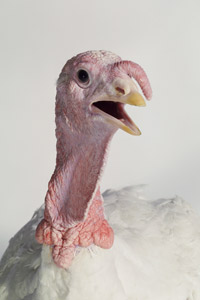 Broad-breasted white turkeys are bred for their white meat and fast growth -- not for their health, gobbles or brains. See pictures of wild turkeys.
Dan Burn-Forti/Stone/­Getty Images

Americans gobble up a lot of turkey: 267 million­ turkeys are sold in the United States each year [source: Elias]. Considering all those turkeys, it may surprise you to hear that there's one that dominates the competition at the supermarket: the broad-breasted white turkey. Most Americans have never eaten another kind. The turkeys look just like their name suggests: They're bred for big breasts, the bigger the better, and their pure white feat­hers (pop-up timer not present at birth). With their twin peaks and fair hair, they're like the Anna Nicole Smith of poultry. But turkeys weren't always like this. It wasn't until the 1950s that turkey farmer George Nicholas gave the birds a Hollywood makeover and transformed turkey farming into a multimillion-dollar business.

In the 1930s, families began asking for small turkeys, little enough to feed smaller families and fit easily into refrigerators and ovens. They wanted more white meat and no dark pin feathers (back then, cooks needed to clean and dress birds in preparation for roasting -- steps that are now done before we buy our birds). By the end of World War II, selective breeding techniques gave customers what they wanted.

Selective breeding, also called artificial selection, isn't the same as genetic modification (GM), although­ the terms are often used interchangeably. They're both used to alter the genes of an organism (animal, plant or bacteria). Genetic modification is a high-tech way to change the DNA pattern in an organism -- today it's used commonly in cotton, corn, soy and canola production. With GM techniques, genes from any organism are crossed to create something new. Hypothetically, with GM you could crossbreed cotton and pigs.

­With selective breeding, two members of the same species are bred to exploit desirable dominant characteristics, which they pass along to their offspring. Cows that produce the most milk may be selected to breed and pass that trait to offspring, thereby increasing milk yields of futu­re generations. Two types of corn could be crossbred to produce a high-yield hybrid. In the case of turkeys, quick-growing birds with bigger breasts and­ white feathers were selected to produce broad-breasted whites.

­Let's look into the life of the broad-breasted white turkeys and their distant cousins, the once nearly extinct heritage birds.