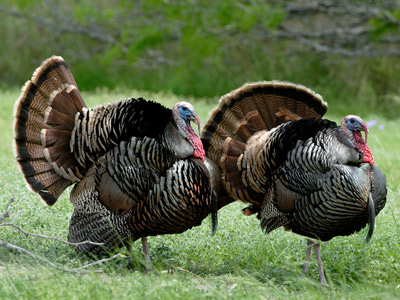 Wild turkeys like these are the descendents of the birds pilgrims would've encountered. They haven't been tampered with genetically.
Stephen J. Krasemann / Photographer's Choice /Getty Images

­When Ben Franklin suggested in 1784 that the turkey be the national bird of the United States, he couldn't have imagined the factory farms teeming with fat, dumb broad-breasted white turkeys.

Turkeys raised in today's factory farms are unrecognizable from the wild birds Franklin knew. Industry-bred birds have unusually large breasts, so disproportionate with the rest of their bodies that they often have trouble standing, walking and mating -- these turkeys rely on artificial insemination for reproduction. They begin life hatched in incubators, have their upper beaks and toenails clipped and spend their days and nights eating fortified corn in a barn full of hundreds of fellow turkeys. Their limited family tree has bred them to be dim-witted and disease-prone; they're given antibiotics to prevent a variety of ailments. Industry turkeys are abnormally fast growing, and by the time they're 12 weeks old, they're shipped off to the slaughterhouse.

­There is an alternative to factory breeding: heritage turkeys, which were nearly extinct as recently as the end of the 20th century. But in the 2006 U.S. turkey census, there were about 8,800 heritage turkeys -- a big jump from the 1,300 heritage turkeys in 1997 [source: Mapes]. They're making a comeback with the help of small enthusiast groups and the Slow Food movement, and you can buy them in some specia­lty markets around the country. Slow Food aficionados value knowing where the food they eat comes from, how it's raised, how it tastes and how it's linked to the community and the environment. And they'll tell you a heritage bird isn't in the same league as the frozen, bowling-ball shaped turkey in your local market's freezer. These birds have rich, gamey meat that doesn't need gravy to add flavor.

To be considered a heritage variety, the turkey needs to meet three criteria. First, it needs to mate naturally, and its genetic legacy must also be bred naturally. Second, it must live a long and productive life outdoors, which means it must be fit and self-reliant enough to endure whatever the environment throws its way. Unlike industry-bred birds, heritage turkeys can roost, run and fly. Hens (female turkeys) typically live for five to seven years while toms (male turkeys) live about three to five years [source: American Livestock Breeds Conservancy]. And lastly, it should grow at a slow rate. While broad-breasted white turkeys are bred for their ability to mature quickly, heritage turkeys are allowed to take their time -- the development of healthy skeletons, organs and muscles can take up to 28 weeks [source: American Livestock Breeds Conservancy].

But most Americans will be sticking to the easy-to-find broad-breasted white. So when you give thanks over your turkey this Thanksgiving, remember to thank selective breeding for the bounty of white meat of which you are about to partake.

Although breeders may be interested in engineering bigger birds, they're not as interested in telling you about it. And for now, the U.S. Food and Drug Administration agrees -- producers aren't required to label genetically engineered poultry, meat or seafood. Nor are they required to include information about any antibiotics, hormones or other drugs given to the animals.