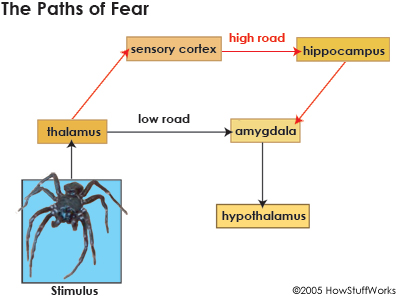 Creating fear is a process that takes place in the brain and is completely unconscious. Learn about the process of creating fear and the paths of fear.

The process of creating fear takes place in the brain and is entirely unconscious. There are two paths involved in the fear response: The low road is quick and messy, while the high road takes more time and delivers a more precise interpretation of events. Both processes are happening simultaneously.

The idea behind the low road is "take no chances." If the front door to your home is suddenly knocking against the frame, it could be the wind. It could also be a burglar trying to get in. It's far less dangerous to assume it's a burglar and have it turn out to be the wind than to assume it's the wind and have it turn out to be a burglar. The low road shoots first and asks questions later. The process looks like this:

The door knocking against the door frame is the stimulus. As soon as you hear the sound and see the motion, your brain sends this sensory data to the thalamus. At this point, the thalamus doesn't know if the signals it's receiving are signs of danger or not, but since they might be, it forwards the information to the amygdala. The amygdala receives the neural impulses and takes action to protect you: It tells the hypothalamus to initiate the fight-or-flight response that could save your life if what you're seeing and hearing turns out to be an intruder.

The high road is much more thoughtful. While the low road is initiating the fear response just in case, the high road is considering all of the options. Is it a burglar, or is it the wind? The long process looks like this:

When your eyes and ears sense the sound and motion of the door, they relay this information to the thalamus. The thalamus sends this information to the sensory cortex, where it is interpreted for meaning. The sensory cortex determines that there is more than one possible interpretation of the data and passes it along to the hippocampus to establish context. The hippocampus asks questions like, "Have I seen this particular stimulus before? If so, what did it mean that time? What other things are going on that might give me clues as to whether this is a burglar or a wind storm?" The hippocampus might pick up on other data being relayed through the high road, like the tapping of branches against a window, a muffled howling sound outside and the clatter of patio furniture flying about. Taking into account this other information, the hippocampus determines that the door action is most likely the result of wind. It sends a message to the amygdala that there is no danger, and the amygdala in turn tells the hypothalamus to shut off the fight-or-flight response.

The sensory data regarding the door -- the stimulus -- is following both paths at the same time. But the high road takes longer than the low road. That's why you have a moment or two of terror before you calm down.