When is laughter a medical symptom? 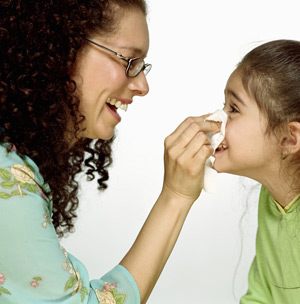 It may look like fun, but uncontrollable laughter can be a symptom of something far more serious.
Tom LeGoff/Digital Vision/Getty Images

Normally, we laugh because something's funny, but sometimes laughter can be something more serious -- a medical symptom. This sounds a little strange -- what do laughter and sickness have to do with each other? When we laugh, it's usually a sign of happiness. According to the science of happiness, intentional laughter can even uplift our mood and make us happy [source: Lamber]. But every now and then, you'll find yourself waiting in line at the bank or at the grocery store when someone just laughs suddenly and wildly for no apparent reason. He or she may have a tic and may make twitching motions, or may seem slightly disoriented. The person may be laughing and crying at the same time in a way that seems childish or violent.

When we laugh unintentionally and repeatedly, we may be experiencing pathological laughter. That's a sign of an underlying disease or medical condition that usually affects the nervous system, and researchers are still learning more about this phenomenon. (Pathological laughter usually isn't associated with humor, mirth or any other expression of happiness.)

As you probably know, our brain is the like the cockpit of our nervous system. It sends signals that control involuntary actions like breathing as well as voluntary actions like walking or laughing. When those signals go awry, due to conditions like a chemical imbalance, an abnormal growth in the brain or even a birth defect, they can cause bouts of odd laughter.

Let's learn more about these diseases and medical conditions that can cause the kind of laughter that doesn't make you smile.

Usually, other warning signs of sickness cause patients or their families to seek help, but sometimes, laughter is a medical symptom that deserves attention. Here's an example: In 2007, a 3-year-old girl in New York began having seizures that were quite unusual -- she grimaced and laughed during her episodes. Doctors discovered that she had a rare form of epilepsy that was causing the involuntary laughter, and they performed surgery to remove a benign tumor that was growing in the girl's brain. The operation cured her of her laughing fits [source: Chang].

Surgeons and neurologists have helped people with brain tumors or cysts that cause uncontrollable and embarrassing fits of laughter. Removing these growths eliminates pressure on the parts of the brain that trigger involuntary laughter. An acute stroke can also cause pathological laughter [source: Kim].

Then there's Angelman syndrome and Tourette syndrome, both of which carry laughter as a symptom. Angelman syndrome (AS) is a rare chromosomal disorder that affects the nervous system. People with this condition usually cannot speak and display "a happy, excitable demeanor with frequent smiling and laughter" [source: NIH]. They laugh frequently due to heightened stimulation of the parts of the brain that control happiness. Tourette syndrome (TS) is a neurobiological disorder that causes a combination of tics and involuntary vocal outbursts. People with TS usually don't need treatment unless their tics interrupt daily activities like work or school. Medication and psychotherapy can help patients minimize their symptoms.

Laughter can also be a symptom of drug abuse or chemical addiction. In both of these illnesses, a malfunction occurs in the way the nervous system transmits signals -- even those that trigger laughter. Dementia and anxiety can also cause abnormal laughter.

To learn more about laughter as a medical symptom, explore the links on the next page.

Is It a Laughing Matter?

Laughter and sickness are usually mentioned in the same conversation when people discuss happiness and how it can prevent or chase away illness. Earlier we touched on the idea that our brains determine our particular level of happiness. Some researchers say that we can control the chemical processes in our noggins by steering our thoughts and willfully laughing.

How accurate is our mental image of ourselves?
Why Humans Scream, Make Crazy Faces When Terrified
Think You Have a Concussion? A Blood Test Could Diagnose It