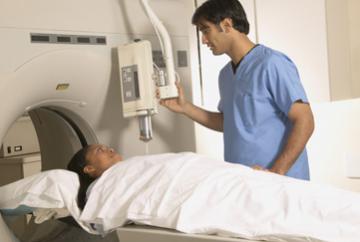 Plush Studios/Blend Images/Getty Images
This patient was cleared for take-off.

Maybe you're concerned about the long-term impact of having all your atoms mixed about, but once you're out of the magnetic field, your body and its chemistry return to normal. There are no known biological hazards to humans from being exposed to magnetic fields of the strength used in medical imaging today. The fact that MRI systems don’t use ionizing radiation, as other imaging devices do, is a comfort to many patients, as is the fact that MRI contrast materials have a very low incidence of side effects. Most facilities prefer not to image pregnant women, due to limited research of the biological effects of magnetic fields on a developing fetus. The decision of whether or not to scan a pregnant patient is made on a case-by-case basis with consultation between the MRI radiologist and the patient's obstetrician.

However, the MRI suite can be a very dangerous place if strict precautions are not observed. Credit cards or anything else with magnetic encoding will be erased. Metal objects can become dangerous projectiles if they are taken into the scan room. For example, paperclips, pens, keys, scissors, jewelry, stethoscopes and any other small objects can be pulled out of pockets and off the body without warning, at which point they fly toward the opening of the magnet at very high speeds.

Big objects pose a risk, too -- mop buckets, vacuum cleaners, IV poles, patient stretchers, heart monitors and countless other objects have all been pulled into the magnetic fields of the MRI. In 2001, a young boy undergoing a scan was killed when an oxygen tank was pulled into the magnetic bore [source: McNeil]. Once, a pistol flew out of a policeman's holster, the force causing the gun to fire. No one was injured.

To ensure safety, patients and support staff should be thoroughly screened for metal objects prior to entering the scan room. Often, however, patients have implants inside them that make it very dangerous for them to be in the presence of a strong magnetic field. These include:

Most modern surgical implants, including staples, artificial joints and stents are made of non-magnetic materials, and even if they're not, they may be approved for scanning. But let your doctor know, as some orthopedic hardware in the area of a scan can cause distortions in the image.