by Jennifer Horton
Prev NEXT
9 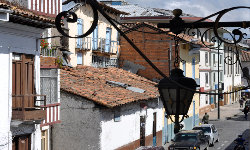 For year-round spring, Cuenca, Ecuador is the place to be.
©iStockphoto

Don't let this country's name fool you. Despite its location on the equator, Ecuador's elevation helps temper the heat. The city of Cuenca, which is located 8,000 feet (2,438 meters) high in the Andes and was ranked as the top place to retire by International Living Magazine in 2009, has spring-like weather year round [source: MSN Money].

But if spring weather isn't your thing, don't stop reading just yet. Due to the country's varied landscape, climate is dependent in large part on where you are in relation to the Andes Mountains, which bisect the country from north to south. The country has four distinct geographical regions. To the west of the Andes lie the coastal plains and a more tropical climate. These gradually rise to form the Sierra, or Andean uplands, as you move east. Here the climate is much cooler. East of the Andes are the Amazonian jungle lowlands, where the climate is tropical.

Finally, nearly 600 miles (960 kilometers) off the country's west coast, lies Ecuador's crown jewel: the Galapagos Islands. These volcanic islands are home to a plethora of wildlife found nowhere else on Earth, though the mainland has its fair share as well. While Ecuador occupies only .02 percent of the world's landmass, it contains a whopping 10 percent of its plant and animal species [source: International Living Perfect Place]. That many creatures can't be wrong: If they find Ecuador a hospitable place to live, perhaps you would too.

But don't get too comfortable. South America is home to yet another climatic paradise. Prepare to visit the "rooftop of the world."