Why the Inside of a Tornado Gets Super Cold, Leaves You Gasping for Air

On a June afternoon in 1955, a huge tornado struck central Nebraska. It zoomed down the North Platte River toward the town of Scottsbluff. According to an article from the meteorological publication Monthly Weather Review, three reporters from a radio station's mobile broadcasting unit spotted the funnel just north of town, and tried to flee by driving through a local cemetery, only to encounter a locked gate at the other end. With their escape cut off, they ditched their vehicle — but left the radio transmitter running, so that the public could hear the storm's fury — and took refuge in the basement of a stone building.

The three broadcasters huddled around the basement furnace, and waited for the tornado to reach them. Pretty soon, strange things started happening. First, they saw shovels, hoes, rakes and other tools sucked up the basement's entrance ramp. Then came total darkness and a deep roar, and the furnace twisted and heaved. Then, apparently, for a few minutes the men found themselves inside the vortex of a tornado. Suddenly, they felt the temperature drop, from a mild early summer warmth to an unseasonal coolness, and they had a difficult time finding enough air to breathe. Fortunately, within minutes, the roar of the tornado moved off into the distance, and they were able to step out of the building, which miraculously had suffered only slight damage, while other structures around it had been leveled. Here's some vintage footage of that very twister:

That's a pretty amazing story of luck and survival, but for decades, a few details about it puzzled scientists. Why is the air inside the tornado's vortex colder and thinner than the air around it?

Vatistas says that he has been studying intense vortices — both ones found in nature and man-made ones — for more than a quarter century, and in recent years he's upgraded his mathematical model to account for factors such as density variation and the effects of turbulence.

"We came across the 1955 tornado in search of analogous phenomena with the aim to validate our theoretical results," he writes via email.

As explained in a Concordia press release, the scientists were able to use the new model to figure out that as air pockets — localized regions of air with lower pressure than the surrounding atmosphere — move from the edge of the vortex toward its center, the pockets expand. That expansion brings down the temperature of the air and also makes it thinner. The more the pockets expand, the colder it gets, then the thinner the air gets. In the case of the 1955 tornado, the temperature dropped from 80.6 to 53.6 degrees F (27 to 12 degrees C). The density of the air was 20 percent less than what's found at high altitudes on mountainsides, where climbers have to wear special gear to breathe. That explains why the trapped broadcasters felt chilly and had trouble breathing.

"Luckily, the tornado passed quickly," says Vatistas. "Its center was located 100 feet from the shelter, at the height of the storm, and thus the broadcasters avoided adverse physiological consequences. Other people have indeed survived tornadoes but we could not find [similarly] detailed testimonials."

Vatistas says that the new modeling approach, which the researchers described in a recent article in the Journal of Aircraft of the American Institute of Aeronautics and Astronautics, will help scientists to study violent atmospheric vortices such as tornadoes and waterspouts. It also should prove useful as an engineering tool for optimizing the vortex refrigeration tubes used in industrial processes and to cool electronic components.

"There is a lot to be learned about tornadoes," he writes. " I hope the present tool will help us or others to expose more of the secrets associated with them."

The town of Halstead, Kansas, experienced this tornado in the summer of 2015.
Travis Heying/Wichita Eagle/TNS/Getty Images
Now That's Interesting
Researchers could precisely estimate the 1955 Nebraska tornado's size because it was photographed extensively at the time. It was 5,687 feet (1,733.4 meters) tall and 741 feet (225.9 meters) wide, according to the Monthly Weather Review article.

4 Ways Apostrophes Are Mangled Every Day 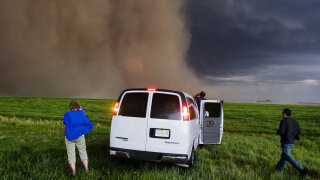 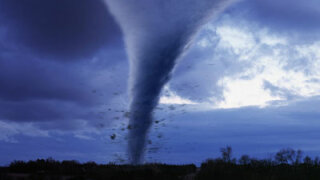 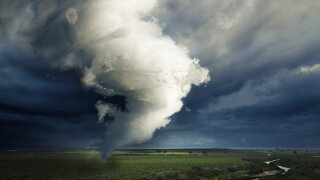 Can a tornado cross a river?

Seahorses Have Hotels! Plus 9 Other Amazing Seahorse Facts
January 21, 2020