How do one-way mirrors work? 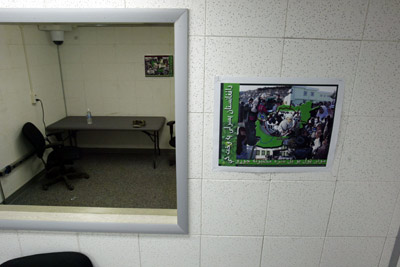 One-way mirrors are coated with a half-silvered layer, allowing the mirror to reflect half the light that strikes its surface.
Joe Raedle/Getty Images

Just about everyone has seen a television show or movie in which a criminal suspect is questioned while detectives watch from behind a one-way mirror. How does a piece of glass manage to reflect light from one side while remaining clear on the other?

The secret is that it doesn't. A one-way mirror has a reflective coating applied in a very thin, sparse layer -- so thin that it's called a half-silvered surface. The name half-silvered comes from the fact that the reflective molecules coat the glass so sparsely that only about half the molecules needed to make the glass an opaque mirror are applied. At the molecular level, there are reflective molecules speckled all over the glass in an even film but only half of the glass is covered. The half-silvered surface will reflect about half the light that strikes its surface, while letting the other half go straight through. It turns out that half-silvered mirrors are also essential to many types of lasers -- see How Lasers Work for details.

So why doesn't the "criminal suspect" see the detectives in the next room? The answer lies in the lighting of the two rooms. The room in which the glass looks like a mirror is kept very brightly lit, so that there is plenty of light to reflect back from the mirror's surface. The other room, in which the glass looks like a window, is kept dark, so there is very little light to transmit through the glass. On the criminal's side, the criminal sees his own reflection. On the detectives' side, the large amount of light coming from the criminal's side is what they see. In many ways, it's the same as if people were whispering in one room while a loud stereo played in the other. The sound of the whisper might carry into the room with the stereo, but it would be drowned out by the intensity of the music.

What Makes a Scent Soothing?
Can you really shatter a glass with a high note?
How Marijuana Works