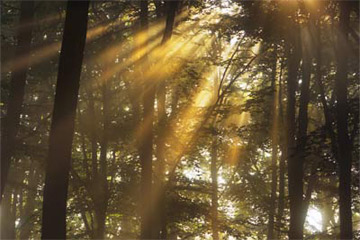 As a citizen of sunny Earth, it's hard not to take light for granted. In this article, we salute you, light, for a lightless world would be a gloomy place indeed.
Frank Krahmer/Getty Images

Light is at once both obvious and mysterious. We are bathed in yellow warmth every day and stave off the darkness with incandescent and fluorescent bulbs. But what exactly is light? We catch glimpses of its nature when a sunbeam angles through a dust-filled room, when a rainbow appears after a storm or when a drinking straw in a glass of water looks disjointed. These glimpses, however, only lead to more questions. Does light travel as a wave, a ray or a stream of particles? Is it a single color or many colors mixed together? Does it have a frequency like sound? And what are some of the common properties of light, such as absorption, reflection, refraction and diffraction?

You might think scientists know all the answers, but light continues to surprise them. Here's an example: We've always taken for granted that light travels faster than anything else in the universe. Then, in 1999, researchers at Harvard University were able to slow a beam of light down to 38 miles an hour (61 kilometers per hour) by passing it through a state of matter known as a Bose-Einstein condensate. That's almost 18 million times slower than normal! No one would have thought such a feat possible just a few years ago, yet this is the capricious way of light. Just when you think you have it figured out, it defies your efforts and seems to change its nature.

Still, we've come a long way in our understanding. Some of the brightest minds in the history of science have focused their powerful intellects on the subject. Albert Einstein tried to imagine what it would be like to ride on a beam of light. "What if one were to run after a ray of light?" he asked. "What if one were riding on the beam? … If one were to run fast enough, would it no longer move at all?"

Einstein, though, is getting ahead of the story. To appreciate how light works, we have to put it in its proper historical context. Our first stop is the ancient world, where some of the earliest scientists and philosophers pondered the true nature of this mysterious substance that stimulates sight and makes things visible.