Former U.S. Coast Guard helicopter rescue swimmer Joseph "Butch" Flythe recalls one of his early rescues, in which he jumped out of a helicopter into the water 100 miles (161 kilometers) off North Carolina's Cape Hatteras to help two men whose sailboat had capsized in a squall. When it came time to help them get into the basket lift that the copter had lowered, the second man became alarmed by the copter's rotor wash. "He freaked out a bit," Flythe recalls. "I had to do a break on him, use pressure points, sort of like wrestling moves, to get him to calm down." Unlike a lifeguard in a pool, rescue swimmers can't let go of someone, no matter what. "If he gets away from me, it's easy to lose contact," Flythe explains.

Welcome to the hazardous, high-pressure world of Coast Guard rescue swimmers, who are trained to jump from helicopters into the water to save lives. As the service's website notes, they're key members in helicopter crews that rescue people from the most precarious of situations — "off cliff faces and rooftops, ice flows and glaciers, and from crashing surf and ocean caves."

As Flythe, a retired master chief petty officer, explains, "You have to be an element of calm in a world of chaos."

It's grueling work, even for specialists who are highly trained and in excellent physical condition, involving the constant threat of serious injury and even death. Amazingly, Flythe says the U.S. Coast Guard has yet to suffer a fatality in the water, but swimmers have dealt with broken bones, damaged spines and other serious injuries. "If you're doing a high hoist and they're putting you down into a vessel that's rocking back and forth, you can get slammed into the side," he explains. During a rescue involving a burning ship, "we had a guy dropped down into a diesel slick, and he got burns in his throat from inhaling it."

Flythe recalls another colleague who narrowly escaped being trapped in a cave, and had to exert himself so strenuously that he pushed his core body temperature up to 104 degrees F (40 degrees Celsius).

History of the Rescue Swimmer

The Coast Guard's rescue swimmer program was created after the 1983 Marine Electric tragedy, in which a U.S. Coast Guard helicopter team attempted to rescue 34 crew members of the ship the Marine Electric that capsized during a winter storm off the coast of Virginia. By the time the rescue team arrived on the scene, most of the people in the water had developed hypothermia and were unable to climb into the aircraft's rescue basket, and despite a day's worth of grueling efforts, only three of the ship's crew of 34 were saved. After an investigation of the disaster, Congress directed the Coast Guard to train selected members of the service to go into the water to perform rescues.

Flythe, one of the Coast Guard's initial group of rescue swimmers, later ran rescue swimmer training at the service's facility in Elizabeth City, North Carolina, and eventually became manager of the national rescue swimming program before retiring in 2007. As he explains, Coast Guard rescue swimmers technically are designated as aviation survival technicians (AST). Nevertheless, Flythe explains, "when guys go into a bar and someone asks what they do, they'll say, 'I'm a rescue swimmer.'"

In addition to rescue swimming, their duties include inspecting and maintaining emergency equipment and training and testing others in survival skills, such as how to get out of a sinking aircraft.

Flythe, who was trained by the U.S. Navy because the Coast Guard hadn't yet started its own school, says that the Coast Guard rescue swimmers' function is different from their Navy counterparts, whose job primarily is to rescue well-trained pilots who've crashed in the water. "Their focus is combat rescue, and they deploy in some very hairy situations," he notes. So do the Coast Guard's rescue swimmers, but they have an additional challenge, in that they're generally coming to the assistance of civilians.

"I would get lowered down to a fishing boat with mom, pop, some kids and the dog," explains Flythe. "We have to deal with untrained people."

That means that in addition to being a highly conditioned athlete and a skilled swimmer, a rescue swimmer also has to be part psychologist, and understand how to deal with someone paralyzed by panic in an unfamiliar, frightening situation.

From the time that they jump from the copter into the water — ideally, from a height of 10 to 15 feet (3 to 4.5 meters) — rescue swimmers also have to work against the clock, because the aircraft only has a limited amount of fuel, and has to keep enough in the tank to get back to land.

Rescue swimmers go into the water clad in wetsuits with other layers of clothing underneath to protect them against cold water. They're also outfitted with a protective helmet, a mask and snorkel, a safety harness, and an array of gear that includes a knife, a strobe light to make them visible to aircraft, and a radio that enables them to communicate with the copter's pilot if there's a need to change the game plan for a rescue, according to Flythe. One of the most important parts of their gear are the big black fins that enable them to swim more powerfully.

They're also equipped with a presence of mind that comes from the Coast Guard's arduous training, in which they're subjected to simulated storms, complete with artificially generated waves and lightning sounds, and even water spray jets to simulate the chaotic environment underneath a hovering copter.

"The training also measures how that person reacts under stress," Flythe explains. "They'll introduce scenarios when a swimmer jumps out of a helicopter and has one survivor, then two survivors, then three."

But despite all the training, rescue swimmers sometimes have to deal with unpredictable risks. Flythe recalls a rescue swimmer in Alaska, for example, who arrived at the scene of an aircraft crash, and was confronted by a bear looking for a quick meal. "He chased [the bear] off with a flare," Flythe says.

The people who take on such a risky, stressful job have a variety of motivations. For some, it's a desire to have a challenging career, while others may be driven by patriotism or the altruistic satisfaction of helping save others. As Flythe explains: "When you're in the aircraft afterward and the people you've rescued are looking at you, you can see the gratitude in their eyes. "

Now That's Cool
Flythe portrayed himself in the 2006 action thriller "The Guardian," a film about Coast Guard rescue swimmers, which starred Kevin Costner and Ashton Kutcher.

Dive Inside the Weird World of the Ocean Sunfish

How Chameleons Change Color and Why They Do It 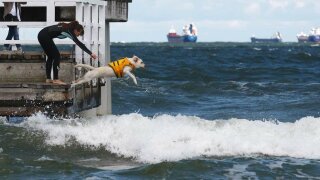 Amazing Water Dogs to the Rescue!

How the Coast Guard Foundation Works 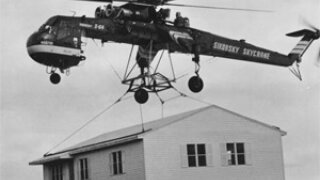