How the U.S. Coast Guard Works 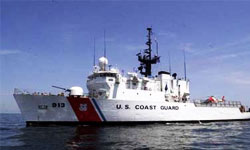 ­A strong sense of tradition, an underdog mentality and a "make do with less" attitude are the hallmarks ­of the U.S. Coast G­uard. Unique among U.S. armed forces, the Coast Guard is perpetually on active duty, chronically underfunded, entrusted with a vast array of responsibilities, but often overlooked. If you watched television coverage of the devastation of Hurricane Katrina in 2005, you may have seen Coast Guard helicopters hovering above a flooded New Orleans, plucking stranded storm victims from rooftops. But the Coast Guard is far more than a search-and-rescue brigade -- in fact, they even fought in naval battles in the Atlantic Ocean during World War II.

Most military services have a fairly straightforward goal: train and prepare for war and fight that war when necessary. But the Coast Guard has a patchwork of functions, tasks and responsibilities. Because they are always on the job, they don't have nearly as much time to train as the other military branches.

­The Coast Guard's mishmash job description stems from the fact that the service itself is a conglomeration of other government agencies that have been incorporated over the decades. Some of the Coast Guard's primary responsibilities include:

The Coast Guard has law enforcement powers within U.S. waters, which extend 200 miles from shores, and on international waters. Coast Guard authority supersedes that of the U.S. Navy in terms of law enforcement -- a Coast guard captain can halt, board and even seize any vessel without a warrant, court order or direct orders from a superior, including U.S. Navy vessels.

Next, we'll look at the Coast Guard hierarchy.