What is going on during a near-death experience? 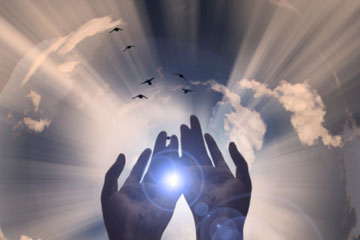 A man we'll call Joe recalls plunging into darkness and seeing a bright light. He remembers a field of flowers and a figure in white who spoke to him about his future. The next thing he recalls is awakening to discover that during the time he'd experienced this vision, he'd actually been lying on an operating table with doctors hovering over him, frantically trying to restart his stopped heart.

You've probably heard stories similar to this one, which was recounted in a 2006 New Scientist article. What Joe remembers experiencing is called a near-death experience (NDE). Reportedly, about 10 to 20 percent of people who survive heart attacks experience an NDE [source: Callaway]. Written accounts of NDEs go back to ancient times. Usually, they involve euphoria, tunnels, bright lights, ethereal beings or some combination of those phenomena. Some people report seeing a high-speed replay of memories -- aka, their lives flash before their eyes.

Nobody really knows what NDEs are, or how and why they occur, though there are widely-ranging opinions. Those who believe in the metaphysical think that during an NDE, a seriously ill or injured person's soul leaves the physical body and journeys to the entrance of the afterlife. There, for whatever reason, he or she is turned away and sent back to resume Earthly life -- sometimes with a newfound insight about life's purpose.

Physicians and neuroscientists who've searched for a less mystical explanation for NDEs suspect they're hallucinations, somehow caused by the process of the dying brain shutting down. Over the years, some have theorized that NDEs result when the brain is deprived of oxygen, or when a mysterious, yet-unverified chemical binds itself to neurons in an effort to protect them from that deprivation. Still others think that the brain's impending shutdown triggers a flood of euphoria-causing endorphins, or electrical discharges in the hippocampus (the brain area involved in memory), while others think the state is caused by the side effects of anesthesia or medications.

However, so far, science has failed to come up with an airtight explanation for NDEs. In the largest-ever study of the phenomenon, published in the Lancet in 2001, Dutch physicians interviewed 344 mostly elderly hospital patients who survived brushes with death in which their hearts stopped. Only 18 percent of them reported experiencing NDEs, and the researchers found no link to the amount of time they were in cardiac arrest, or the drugs they were given.

Since then, a 2010 study published in the journal Clinical Care offers yet another possible explanation. Researchers looked at blood samples taken from 52 patients shortly after they'd survived cardiac arrest. The 11 patients who reported experiencing NDEs tended to have significantly higher levels of carbon dioxide (CO2) in their bloodstreams. This data jibes with other studies that have linked high CO2 levels with visual hallucinations. And mountain climbers who've experienced CO2 spikes at high altitudes have reported seeing bright lights and having other hallucinations similar to NDEs. But again, the researchers only offer a caveat. Not every patient in the study who had high CO2 levels had an NDE.

There's also some evidence that NDEs may have something to do with the mind itself, rather than the physiological processes. Studies have found that younger, female and deeply religious patients are more likely to report NDEs than people who were afraid of dying. The 2001 Dutch study reported another intriguing finding: When researchers re-interviewed the 23 people who'd experienced NDEs and were still alive eight years later, those people showed significant psychological differences. Most of them had become more emotionally vulnerable and empathetic toward others.

Do Parallel Universes Really Exist?
Is There a Hidden Cure for Cancer?
How Long Could Humanity Survive a Zombie Apocalypse?