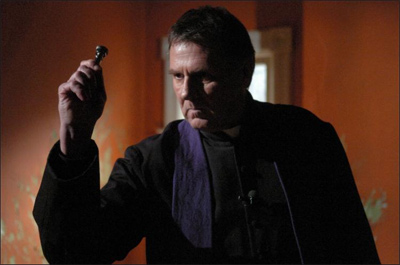 To perform the rite, the exorcist dresses in his surplice and purple stole. The ritual of exorcism is mostly a series of prayers, statements and appeals. These prayers are loosely broken down into the "imploring formula," in which the priest asks God to free the subject from the devil ("God, whose nature is ever merciful and forgiving, accept our prayer that this servant of yours, bound by the fetters of sin, may be pardoned by your loving kindness"), and the "imperative formula," in which the priest demands in the name of God that the devil leave the subject's body ("Depart, then, impious one, depart, accursed one, depart with all your deceits, for God has willed that man should be His temple"). To read the entire 1999 revised rite, see Catholic Doors Ministry: 1999 Rite of Exorcism.

In addition to these recitations, the priest takes certain actions at particular times during the rite: He sprinkles holy water on everyone in the room, lays his hands on the subject, makes the sign of the cross both on himself and on the subject and touches the subject with a Catholic relic (usually an object associated with a saint).

Malachi Martin, a former Jesuit priest and self-proclaimed (but not official) exorcist, offers additional information on exorcism -- information not endorsed by the Church. A controversial figure in the Catholic world, Martin reveals in the book "Hostage to the Devil" what he considers to be the typical stages of an exorcism (Cuneo 19-20):

"Hostage to the Devil" created quite a stir in the Church. The book details supposedly factual exorcisms that Martin claims to have performed, assisted with or witnessed. The exorcisms Martin describes are on the level with "The Exorcism" in terms of action and violence. It has been criticized by believers, who think Martin has sensationalized and therefore belittled the power of the devil. But if Martin's vivid scenes don't ring true to the Church and its supporters, what does a real exorcism look like?

A 2005 Gallup poll reports that 42 percent of people in the United States believe in the possibility of diabolical possession [ref].