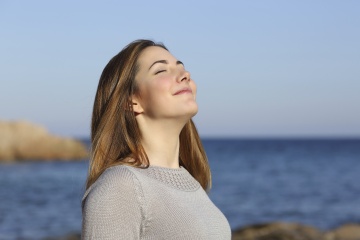 What you’re smelling isn’t sunshine, but the sun’s presence can affect the scent of the air.
AntonioGuillem/iStock/Thinkstock

Of course something can smell like sunshine! You can smell anything: rainbows, kittens, pleasant thoughts. Only catch is that you have to associate a smell with those things, and the smell isn't inherent to the object. A rainbow might smell like rain, for instance, because it comes after a shower. That student loan you took out to study classical languages for four years might carry a whiff of burning money.

So if we look at it that way, then sure, something can smell like sunshine. Laundry hung on the line. Your baby nephew. Heck, even that student loan. Why not? It's your perception. One researcher even found that when she asked people to smell Parmesan cheese, they found the scent pleasant — until a week later, when she claimed the odor was vomit instead. Suddenly, those same people were disgusted by the exact same smell [source: Wack].

But the truth is that the sun itself doesn't have a smell — or if it does, we can't get a whiff of it. So what we're left with is the "smell" of outside air. And that's where the story gets interesting, because it turns out that air really does smell differently based on whether it's a warm, sunny day or a cold one. It's not related to the sun but instead has to do with how odor molecules move. In warm air, they circulate freely, while in cold air, they move slower [source: Sohn].

A warm day will simply produce more smells, in other words. And that isn't so crazy when you think about your morning coffee. Put a steaming cup on your desk in the morning, and its waft is heavenly. Leave it there all day, and by afternoon, that cold cup of joe isn't going to tempt your nose. In that sense, there's some truth to the idea that seasons smell differently. If the weather has been 80 F (27 C) for three months straight and the temp suddenly drops to 60 F (16 C), we might register that the seasons are changing because our smells are dampened.

But let's step back a bit and talk more about space. Although we can't yet claim a scent for the sun, scientists have found that the center of the galaxy might be more delicious than expected. At the heart of the Milky Way is a huge cloud of dust and gas; researchers were hoping to find evidence of amino acids, which would in turn be evidence of life in the universe. What they found instead was ethyl formate, the chemical that gives raspberries and rum their flavor and smell [source: Sample].