What is Littlewood's law of miracles? 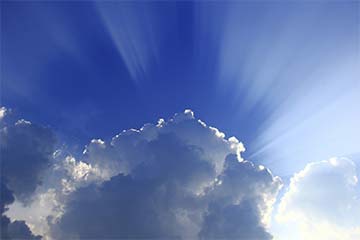 A mathematician figured out that a miracle occurs once every 35 days. Was he serious?
Airubon/iStock/Thinkstock

You might be walking along the street and see a bald eagle swooping down to ride on the back of a tortoise? And you're like, "Huh, what are the chances?" Or say you're running late to a dentist appointment but somehow you get all green lights on your trip and so you make it to her office on time. Amazing, right? Are the odds in both cases really that astounding that they're miraculous?

Math professor John Littlewood's law of miracles is pretty specific. First off, it says that we should expect a miracle every 35 days -- which seems like decent odds! Most of us, after all, would probably settle for a miracle a couple of times a year -- even once, perhaps, if it was a good enough one. Littlewood also defined a miracle as something that has a one in a million chance of happening. He based his calculation on the assumption that the typical person is awake and alert eight hours a day (not counting sleep time and time spent in mindless activities like watching reruns of "The Simpsons") and that events occur at an approximate rate of one per second [source: Inglis-Arkell].

So that's all fine and good, but a larger question remains. Mainly, how the heck did a Cambridge University professor come up with some sort of equation to determine a rather spiritual and not wholly objective number? Well, let's first get a big, important point out of the way.

Yep, when he was creating equations for such a "law," he wasn't doing it to prove that miracles are real and we should all be writing in our gratitude journals and saying "namaste" all the time. He was actually saying the opposite: If we think that a one-in-a-million chance of something is a miracle, then take a look at how often miracles happen. And instead of saying how improbable it is, you should probably consider your miracle nothing more than a coincidence -- which happens a lot [source: Littlewood].

Strangely, it was a 2004 New York Review of Books article critiquing another book ("Debunked!" by Georges Charpak and Henri Broch) that seems to have grown the legend of Littlewood's miracles. In the review, author Freeman Dyson uses Littlewood's equations to bolster an opinion that paranormal phenomena could be real [sources: Shermer, Horgan].

But let's reiterate: Littlewood was actually kind of making fun of those who thought miracles were, well, miraculous. Don't blame him for his law.

10 Completely False 'Facts' Everyone Knows
What is pyrokinesis?
What's Going on With Detroit's Mysterious Zug Island?