What if everyone had the same salary? 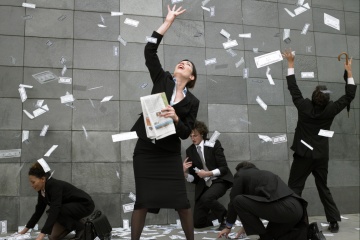 A universal salary may seem like a win for everyone, but it has some drawbacks.
Michael Blann/Digital Vision/Thinkstock

The job market in the United States is ruled by supply and demand, which work together to ensure a fair system where workers doing difficult, vital and unpleasant work are paid the most. Wealth is distributed fairly because of A) the low supply of people willing to do this kind of work, and B) the high demand for people society needs in order to function. That's why firefighters and teachers make so much money.

Wait, no it's not. That's not how it works at all. Take firefighters. In 2014, the median annual wage for U.S. firefighters — who prevent the country from burning to the ground — was $45,970 [source: BLS]. Meanwhile, the former chief operating officer of Yahoo, Henrique de Castro, had an annual salary upward of $50 million and received a $58 million severance package after working there for 15 months [source: Colt]. At no point during his tenure at Yahoo did he save anyone from a burning building.

Income inequality has been rising steadily since the 1980s. Those critical of the trend say it discourages the poorest people from working hard and leaves more of us unhappy, unhealthy or in jail. These problems cut into productivity and boost costs related to public health and law enforcement [source: Gordon]. But what if everyone in the U.S. received equal pay, CEOs and fry cooks alike? Would society benefit?

Let's take a look at a scenario where everyone got the same check every year no matter how well they did their job, how many hours they worked or what kind of contribution they made to society.

What problems would we have to deal with? Well, a lot of people would be unhappy. People doing miserable or difficult work would feel they were being robbed. The former high earners would miss their wealth. So to gain popular support for a universal wage, we'd need to pay a majority of Americans more than they'd been making before. Recent studies have found that a two-income, two-child family has to make at least $72,000 a year to feel economically secure — that's for basic necessities not including buying a house, investing or taking vacations [source: Gardner]. In 2015, though, the median household income in the U.S. was about $50,000 [source: Vo]. If we offered a minimum salary of $60,000 a year to everyone who worked, we'd be guaranteeing that more than half of the United States would be making more money than they were before.

But then what do we do with all the money in people's pockets? Say you run a small but successful cupcake business with four employees. You pay yourself and your employees $300,000 a year, but — thanks to many customers' newfound hefty paychecks — people can't get enough of your cupcakes, and you bring in $1 million. What happens to the rest of the money? You don't get to keep it or distribute it among your employees, which would violate the universal wage law. But you don't want to burn it in the alley out back.

Healthy economies with consumers who spend money create wealth. That money has to go somewhere. If business owners were responsible for paying themselves, presumably many of them would try to game the system and hide away more money than they were allowed to earn. While it would raise some objections, extra profits could go to the government. No one would have to pay taxes, and the government could run some well-funded social programs. All produced wealth could go toward providing health services, parks, roads and schools.

Of course, a universal maximum wage is really only workable if people, you know, work. But with great social programs and a guaranteed income not tied to performance, the only people who would come to work every day would be those who loved their jobs so much they'd do them for free. Otherwise, what's a good reason to work? Why not call in sick over and over? Without financial incentive, we'd have to find some other way to keep people in line. Shirkers would have to be fined, publicly shamed or imprisoned.

Another challenge: the loss of investment. Capitalism depends on people's ability to borrow money, take on financial risk and turn a profit, but in our universal wage society, there's no incentive to make a loan: You're not allowed to make more money than you have. But because investment drives economic growth, we'd still need a way to pump money into new ventures. The government would become the only source of financing outside of the $60,000 we each made every year. Economic growth would be politically motivated, as government officials decide where and how to distribute money.

If this sounds like a totalitarian state, that's because it is. We probably should have mentioned this, but this idea has been tried before. And it turned out ... not great. During the Russian Revolution, attempts were made to institute equal wages for everyone. The Foreign Affairs Office paid 500 rubles to every employee, but the system was abandoned almost immediately [source: Petroff]. The truth is that authoritarianism is probably necessary for radical wealth distribution, but every time people have tried a strict command economy with equal pay for equal work it's fallen apart. Corruption set in immediately. Political dissidents were sent to prison. Peasants starved. Equal wages for everyone is pretty much guaranteed to crash and burn.

People like their stuff. They like getting it, and they hate giving it up. Drastic efforts to more equally distribute stuff probably wouldn't go over well. But drastic income inequality — where a small minority controls most of the wealth — doesn't work for society either. Is there any hope for an equitable distribution of wealth that doesn't involve killing any Romanovs? In 2013 the Swiss government offered voters a proposal to create a maximum wage, where salaries for CEOs were capped at 12 times that of the company's lowest wage earners. There's a neat moral component to that idea, suggesting no one should make more in a month than other people in the same company make in a year. It would have been an interesting experiment, but Swiss voters rejected the proposal for the same reasons that a universal wage wouldn't work. When there's a ceiling, there's no reason to keep growing.

Do Parallel Universes Really Exist?
Is There a Hidden Cure for Cancer?
How Long Could Humanity Survive a Zombie Apocalypse?