The History of Machine Guns and Semi-automatic Weapons 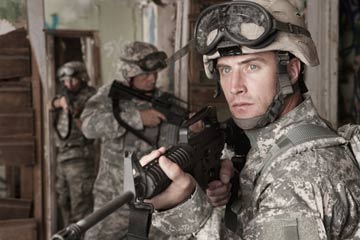 Crude versions of the machine gun, including the hand-crank-operated Gatling gun, first came into use during the American Civil War. Invented by Richard J. Gatling in 1862 and an integral part of the U.S. military arsenal until 1911, the Gatling gun used multiple barrels in a cylinder position to fire up to 600 shots per minute. The gun was not fully automatic, however, because it required users to continuously turn the crank in order to keep firing. The first fully automatic weapon was created by Hiram Maxim in 1885; his Maxim machine gun used a recoil system to fire up to 500 rounds per minute [sources: LSU Civil War Center, Spartacus Educational].

It wasn't until World War I, however, when machine guns similar to those seen today came into regular use on the battlefield. As the guns became lighter, including those added to planes, forces on both sides also more regularly used the weapons in place of single-shot bolt action rifles [source: Duffy].

With the advance of gun technology came the dawn of gun control. Fully automatic machine gun-type weapons have been tightly regulated since Congress passed the National Firearms Act of 1934, largely in response to the growing prevalence of weapons like the Thompson submachine gun ("Tommy gun"), a machine gun with the cartridge of a pistol. Originally developed for use in World War I, the Tommy gun later became popular among Prohibition-era bootleggers and gangsters before the ban [source: Higginbotham].

From there, the story of gun control in the United States has been a cat-and-mouse game of sorts with gun control activists pushing for laws reflecting ever-developing firearm technology, while gun owners and Second Amendment buffs resist further regulation of their constitutional right to bear arms.