by Sarah Gleim Nov 12, 2015
Palestinian protesters throw stones toward an Israeli military vehicle spraying a crowd-control weapon known as "skunk" during clashes following a demonstration in the West Bank in 2014. Jaafar Ashtiyeh/Getty Images

Imagine being sprayed by Pepé Le Pew and an army of his malodorous friends. You'd rush home and soak in a tub of tomato juice to try to get rid of the smell, right? Now imagine a stench that has nothing on what those white-striped stinkers can douse — that's one weapon being used for crowd control in Israel, and it's coming soon to the United States.

The Israel Defense Forces have been waging war against rioters with a nonlethal — albeit truly putrid — product called skunk water, or just skunk since 2008. The spray, which was developed by Israeli firm Odortec, is said to be 100 percent organic and harmless, and consists of an extremely foul-smelling liquid with the viscosity of water that can be dispersed over a large area using a water cannon. Odortec says the overpowering stench of Skunk drives rioters away — and keeps them away, "effectively shutting down escalating situations."

Skunk was first used in August 2008 in the Palestinian village of Ni'lin in the West Bank. Border police squirted the liquid at demonstrators from containers carried on their backs. Since then, it's been used regularly on water cannons against Palestinian neighborhoods in occupied East Jerusalem. But Israel has also started used it against its own citizens, as in the case of Ultra-Orthodox Jews protesting compulsory military service in 2014.

Wyre Davies, a correspondent for BBC News, was reporting on the 2008 protest near the West Bank. "I never actually got Skunk sprayed on me, but saw people who did," he says via email. "The smell was horrendous, of everything rotten – eggs, meat, cabbage, etc."

A Palestinian protester runs to the aid of a boy as an Israeli military vehicle sprays "skunk" in 2015.
Jaafar Ashtiyeh/Getty Images

So what exactly is in Skunk, and is it really safe and nonlethal? According to Odortec's Material Safety Data Sheet, Skunk is nothing more than a mixture of water, yeast and sodium bicarbonate, or baking soda. The MSDS sheet explains "at the pH level of sodium bicarbonate, the yeasts synthesize some amino acids causing heavy odor."

Aside from the smell, there are some minor physical side effects, according to the MSDS sheet. Skunk can cause skin irritation; eyes redness and pain; and abdominal pain if ingested. But as an observer who's been hit by a tear gas canister fired directly at him, Davies says Skunk could be a safer option. "From a perspective of my own personal safety, I'd rather be sprayed with an otherwise harmless, foul-smelling liquid than shot at," he says.

While Skunk water may be "nonlethal" to say, drink, as Odortec suggests, B'Tselem — the Israeli Information Center for Human Rights in the Occupied Territories — reiterates that many forms of crowd control weapons are dangerous if used improperly.

In a 2013 report detailing the crowd control weapons used by Israeli security forces in the West Bank (including East Jerusalem), B'Tselem noted several cases where security forces sprayed Skunk at or near homes, "raising suspicions that it is being used as a punitive measure against residents of villages where regular weekly demonstrations are held."

Israeli police use a "skunk" water cannon to disperse Ultra-Orthodox Jews during a demonstration against compulsory military service in Jerusalem in 2014.
Menahem Kahana/Getty Images

The Association for Civil Rights in Israel (ACRI) also suggests that "police excessively utilized Skunk spray vans in breach of proper procedures and in a manner that caused property damage and personal injury to Palestinian residents."

But it's not just Israeli police using Skunk water — it's now available to U.S. police forces, as well, thanks to U.S. distributor Mistral Security. In November 2014, after violent protests in nearby Ferguson, Missouri, stemming from the fatal shooting of 18-year-old Michael Brown, documents suggest the St. Louis Metropolitan Police Department ordered several canisters of Skunk.

Mistral Security claims it has sold Skunk to other U.S. police departments, but has declined to say which ones. "Applications [of Skunk] include, but are not limited to, border crossings, correctional facilities, demonstrations and sit-ins," says Mistral on its website. Mistral also sells a special decontamination soap designed specifically to counteract the smell.

Regardless of if (or when) the next major U.S. city riots — or when protesters stage a sit-in, if Mistral's suggestion is followed — its citizens could be in for a big, stinking surprise. Police departments may now have a new crowd control weapon at their disposal.

Now That's Interesting
A 2002 medical study found that rubber-coated bullets, used by some security forces for crowd control, could not be considered a safe tool due to potential injuries like blindness and permanent disability. 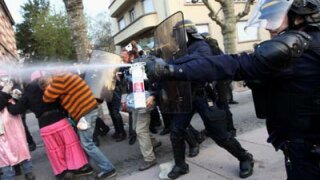 Stuff You Should Know Podcast: How Swat Teams Work