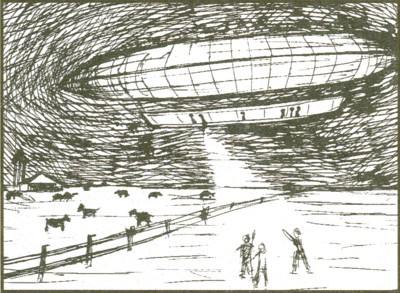 On April 23, 1897, a Kansas newspaper, the Yates Center Farmer's Advocate, reported an incredible story. On the evening of April 19, local rancher Alexander Hamilton, his son, and a hired man saw a giant cigar-shaped UFO hovering above a corral near the house. Hamilton claimed that in a carriage underneath the structure were "six of the strangest beings I ever saw." Just then, the three men heard a calf bawling and found it trapped in the fence, a rope around its neck extending upward. "We tried to get it off but could not," Hamilton said, "so we cut the wire loose to see the ship, heifer and all, rise slowly, disappearing in the northwest."

The next day, Hamilton went looking for the animal. He learned that a neighbor had found the butchered remains in his pasture. The neighbor, according to Hamilton, "was greatly mystified in not being able to find any tracks in the soft ground."

Hamilton's statement was followed by an affidavit signed by a dozen prominent citizens who swore that "for truth and veracity we have never heard [Hamilton's] word questioned." In the following days, his story was published in newspapers throughout the United States and even in Europe.

Ufologists rediscovered the account in the early 1960s, and the story rebounded to life through books and magazines. In 1976, however, an elderly Kansas woman came forward­ to say that shortly before the tale was reported in the Farmer's Advocate, she had heard Hamilton boast to his wife about the story ­he had made up. Hamilton belonged to a local liars' club that delighted in the concoction of outrageous tall tales. According to the woman, "The club soon broke up after the 'airship and cow' story. I guess that one had topped them all."