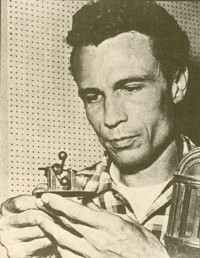 Reincarnated Saturnian and space communicant Howard Menger held forth from his farm in New Jersey, where followers would come to witness... well, something. Followers would see lights and even figures but always in the dark and never up close. Once, when Menger led a follower into a dark building to speak with a spacewoman, a sliver of light happened to fall on the face of the "extraterrestrial." It was, the follower could not help noticing, identical to the face of a young blond woman who happened to be one of Menger's closest associates.

After releasing a book, From Outer Space to You (1959), and a record album, Music from Another Planet, Menger would virtually recant his story, vaguely muttering about a CIA experiment. In the late 1980s he withrew his recantation and marketed a new book detailing his latest cosmic adventures.

Most contactees have managed to stay out of legal trouble, though law-enforcement and other official agencies look into their activities from time to time. Reinhold Schmidt was not so lucky. In the course of contacts with German-speaking Saturnians, Schmidt's space friends showed him secret stores of quartz crystals in the­ mountains of California. Armed with this information and a gift for (so the prosecutor charged) "loving talk," he persuaded several elderly women to invest their money in a crystal-mining venture. The money went, however, into his own pocket. He went on trial for grand theft and from there to jail.

Still, not all contactees are con artists, by any means. In 1962 Gloria-Lee, who chronicled her psychic contacts with "J.W." of Jupiter in Why We Are Here (1959), starved to death in a Washington motel room after a two-month fast for peace ordered by her space friends. In 1954, in the face of massive press ridicule, followers of Dorothy Martin, who communicated with extraterrestrials through automatic writing, quit jobs and cut all other ties as they awaited a prophesied landing of a flying saucer that would pick them up just before geological upheavals caused massive destruction.

The charlatan contactees typically claim physical encounters, nearly always have photographs and other artifacts (in one especially brazen instance, packets of hair from a Venusian dog) to "prove" it, and in general behave more like profiteers than prophets. The psychic contactees, on the other hand, tend to be quiet, unflamboyant, and almost painfully sincere. They can best be described as Space Age religious visionaries. In another century their messages would have been from gods or angels or spirits. These messages, generally inane and rarely profound, are manifestly not from true extraterrestrials. Psychologists who have studied contactees believe these individuals are not crazy, just unusually imaginative; their communicators come from inner, not outer, space, via a nonpathological form of multiple-personality disorder.

Though only a few professional contactees of the 1950s are still alive or active today, the contactee movement is as big and vibrant as ever. This is due in part to the efforts of a Laramie, Wyoming, psychologist, R. Leo Sprinkle, who sponsors an annual summer conference on the University of Wyoming campus. Those attending are mostly individuals convinced that the Galactic Federation -- a sort of extraterrestrial United Nations -- has placed them on Earth to spread the cosmic gospel. In a sense these conferences function as revival meetings in which the faith is renewed even as the larger world continues to scoff.