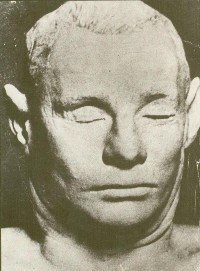 In 1948 an unidentified man was found on a beach in Australia. Eventually, a tabloid reported that he was an extraterrestrial. His death mask often appears in UFO literature.
Globe Photos

The late comedian Jackie Gleason's second wife Beverly tells a strange story that she swears is true. One evening in 1973, she writes in an unpublished book on their marriage, Gleason returned to her Florida home badly shaken. After first refusing to tell her why he was so upset, Gleason confided that earlier in the day his friend President Richard Nixon had arranged for him to visit Homestead Air Force Base in Florida.

Upon his arrival armed guards took Gleason to a building at a remote location on the site. There, Gleason, who harbored an intense interest in UFOs, saw the embalmed bodies of four alien beings, two feet long, with small bald heads and big ears. He was told nothing about the circumstances of their recovery. He swore his wife to secrecy, but after their divorce Beverly freely discussed the story.

In the mid-1980s, when ufologist Larry Bryant sued the U.S. government to get it to reveal its UFO secrets, he tried without success to subpoena Gleason.