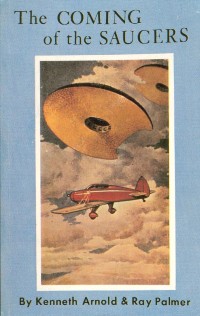 In The Coming of the Saucers, Kenneth Arnold and Ray Palmer hailed the dawning of the UFO age. Arnold recounted his own celebrated sighting as well as his involvement with the notorious Maury Island incident, a hoax Arnold naively participated in.
Mary Evans Picture Library

From the beginning of the UFO phenomenon, the urge to spin yarns proved irresistible to some. Like weeds in saucerdom's fertile ground, UFO hoaxes, tall tales, rumors, and other silliness sprouted and spread.

One of the most notorious -- and successful -- liars, the late Fred L. Crisman, actually bridged the gap between the Shaver mystery and the UFO mystery. Crisman first surfaced in a letter published in the May 1947 issue of Amazing Stories, in which he claimed to have shot his way out of a cave full of deros with a submachine gun. Palmer next heard from him the following July. This time Crisman said he had actual physical evidence of a flying saucer.

Palmer passed the story on to Kenneth Arnold, who was investigating reports in the Pacific Northwest. Arnold interviewed Crisman and an associate, Harold Dahl, who identified themselves as harbor patrolmen (they were not). Crisman, who did most of the talking, reported that Dahl had seen doughnut-shaped craft dump piles of slaglike material on the beach of Maury Island in Puget Sound, The next morning a mysterious man in black threatened Dahl. "I know a great deal more about this experience of yours than you will want to believe," the man said cryptically.

The two men showed the material to Arnold. In a state of high excitement Arnold contacted an Army Air Force intelligence officer of his acquaintance, Lt. Frank M. Brown, who quickly flew up from Hamilton Field in California in the company of another officer. The moment they saw the material, their interest in it evaporated: It was ordinary aluminum. Embarrassed for Arnold, the officers left without telling him their conclusions.

While flying back to Hamilton, their B-25 caught fire and crashed, killing both officers. Though Crisman and Dahl subsequently confessed to other Air Force investigators that they had made up the story, the legend would live on for decades afterward. Some writers-including Arnold and Palmer, who wrote a book about the case-hinted that the officers died because they knew too much. But to Capt. Edward Ruppelt of Project Blue Book, the Maury Island incident was the "dirtiest hoax in UFO history."

Years later Crisman's name would reemerge in another contentious context. In December 1968, while investigating what he believed to be a high-level conspiracy to murder President John F. Kennedy, New Orleans district attorney Jim Garrison called Crisman to testify before a grand jury. Some early assassination-conspiracy theorists would identify Crisman (falsely) as one of the three mysterious "hoboes" arrested and photographed shortly after the shooting in Dallas.

Before his death Crisman was peddling a new, improved, UFO-less version of the Maury Island story. He now claimed that the "truth" involved, not flying doughnuts dropping slag, but something even more dangerous: illegal dumping by military aircraft of radioactive waste into the harbor. Though this tale was no less tall than his earlier one, it has already entered UFO literature as the "solution" to the Maury Island "mystery."

The Truth Behind the Rogue Planet Nibiru
Two for Teegarden: Pint-sized Star System Discovered Right Next Door
New Kaleidoscopic Map Details the Geology of the Moon