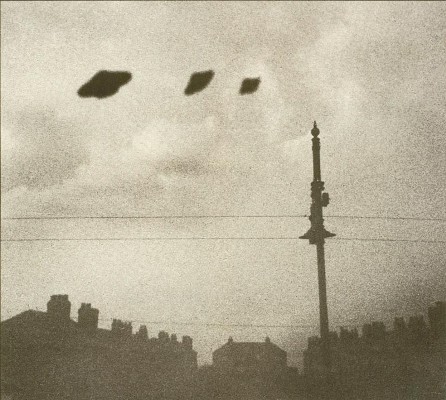 In March 1966 a British teenager photographed these dubious-looking "UFOs" -- apparently superimposed cardboard cutouts -- and persuaded many that they were spaceships from another world.
Fortean Picture Library

In UFO Reality (1983) British ufologist Jenny Randles noted that some UFO witnesses experience a "sensation of being isolated, or transported from the real world into a different environmental framework. . . . I call this the 'Oz Factor,' after the fairytale land of Oz."

In one instance on a late-summer evening in 1978, a Manchester, England, couple watched a UFO as it hovered above a well-traveled street almost inexplicably devoid of its customary brisk vehicular and pedestrian traffic. On the afternoon of April 15, 1989, a father and son watched a metallic, gold-colored, dumbbell-shaped object, accompanied by four smaller discs, maneuvering low in the sky near their home in Novato, California. As puzzling to the witnesses as the UFOs themselves was the absence of other humans at a time of day when people would ordinarily be out.

In Randles' view such reports suggest that in some way the "consciousness of the witness [is] the focal point of the UFO encounter."

Has the 'Twisted' Mystery of Fast Radio Bursts Been Solved?
How do you land a spaceship on a comet?
Ashtar, Master of the Universe